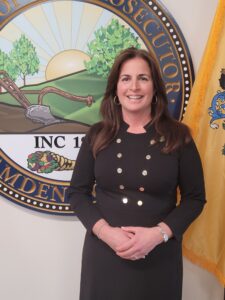 Grace C. MacAulay was sworn in as Camden County Prosecutor on January 6, 2022, after spending most of her professional career with the CCPO.

MacAulay joined the CCPO in August 1992 as an Assistant Prosecutor, serving in the Domestic Violence, Drug Court, Grand Jury, Juvenile, Motions & Appeals, Megan’s Law and Trial Team Units. In March 2012 she was promoted to Deputy Section Chief of the Juvenile Unit where she prosecuted all crimes committed by juveniles while supervising and training newly hired Assistant Prosecutors.

In January 2014, MacAulay was promoted to Section Chief of the Special Victim’s Unit. In that role, she commanded a specialized group of assistant Prosecutors and detectives who were responsible for investigating and prosecuting adults and juveniles who committed criminal acts of sexual and physical abuse and homicide.

She earned her Juris Doctor degree from Widener School of Law and a B.A. degree from Gettysburg College.