Fentanyl is an opioid medication primarily used for pain and with other medications as an anesthetic.  However, it has also been used as a recreational drug.  Often it is mixed with heroin and cocaine.  It has rapid onset effects which last approximately 2 – hours.

It was first made in 1960 by Paul Janssen and approved for medical use in the United States in 1968.  By 2017, fentanyl was the most widely used synthetic opioid in medicine.

In North America, opioids and other prescription drugs became widely distributed, particularly oxycontin.  While these medications were used to ameliorate pain, they were initially touted as non-addictive.  That tragically turned out to not be the case and one result was the fueling of an OPIOID EPIDEMIC the likes of which have never been seen before. Hundreds of thousands of American lives have been lost to the since oxycontin was introduced.  Over 500,000 people lost their lives since 1999.

Multiple efforts, funding initiatives, changes in regulations and efforts nationally through individual communities were made.  The efforts continue.  However, in addition to this crisis the problem is compounded.  Like a ‘perfect storm’ a public health epidemic combined with newer and stronger drugs then combined with a lack of understanding and awareness of the danger was created.  Fentanyl became one of the number one drugs misused.

Unfortunately, data from the New Jersey Substance Abuse Monitoring System (NJSAMS) that treatment providers use, does not yet separate out fentanyl from other opioids. Data from the Medical Examiner  related to ‘accidental deaths’ (or overdoses) secondary to drug abuse, however, does provide a window into the scale of the problem.  This data is older but still demonstrates a very significant problem.  In 2013, there was 1 Camden County decedent with fentanyl in their toxicology report. By 2014, there were 3, 2015 there were 54 and in 2016, there were 84.

Fentanyl continues to be one of the top reasons for these fatalities.  Time and time again, we receive calls that another person lost their life and fentanyl was found in their system.  One more group of families and loved ones are devastated by the loss of someone they cared about, nurtured, tried to assist, guide and looked forward to sharing their lives with!  Additional individuals’ lives with all the potential in the world, are extinguished forever. Families are devastated and children are often left behind.

We can offer more and more treatment but the fact is, we also have to educate about the dangers of substance misuse especially with regard to the purchase of these drugs illegally.  No one knows what is in them!  Few who are out for a recreational ‘mind altering’ experience would do so if they knew that that moment could be their last.

We encourage folks to get sober.  We have a fully funded Recovery Center.  We have increased access to care, insurance coverage, assistance for those without insurance, added additional regulations and removed those that became barriers but again, the fact is, none of these will help if an individual takes the risk to purchase a substance illegally, not knowing what is in it.

This County has been able to secure funding for programs in our jail, hospitals, recovery center and other services. However, reducing overdoses and fatalities, ultimately requires folks to consider every first use of illegal substances may have unintended catastrophic consequences.

According to SAMHSA, “harm reduction is an approach for substance use treatment that involves a set of practical techniques that are openly negotiated with clients around what is most likely to be achieved. The focus is on reducing the negative consequences and risky behaviors of substance use; it neither condones nor condemns any behavior. By incorporating strategies on a continuum from safer drug use, to managed substance use, up to abstinence, harm reduction practice helps clients affect positive changes in their lives.”  Harm reduction has the capacity to reduce the exchange of bloodborne pathogens between persons with SUD.  It also increases the chances of engagement with the treatment delivery system in the future.  Harm reduction techniques employed by Camden County include the distribution of fentanyl test strips and naloxone.  There is evidence that it decreases the number of overdoses and fatalities in the county.  Harm reduction is an evidenced based strategy.

For those already dependent upon opioids, treatment is more readily available than ever before.  Medication assisted treatment, the most evidenced-based treatment for opioid dependence is available in every publicly and privately funded rehabilitation center in South Jersey.  Waiting lists for treatment are significantly diminished if they exist at all.

The County’s Office of Mental Health & Addiction is able to distribute fentanyl test strips.  These kits include information about treatment and how to access.  They are available to the Camden County public at no cost. We regularly schedule naloxone trainings.

Our hope is all our residents will recognize the dangers that come with illegal substances misuse and choose paths that bring understanding, freedom, and life nurturing opportunities.  These overdose fatalities are totally avoidable.  By reaching out, asking for help, and sharing knowledge, together we can all seize this opportunity. We ‘never advocate for the use of illegal substances’, however, our goal remains to reduce deaths by employing the most evidenced-based strategies available.

If you or someone you know is seeking treatment assistance or access to information and/or services, please contact the Office of Mental Health & Addiction at (856) 374-6361. We will respond 9:00-4:30 Monday – Friday. 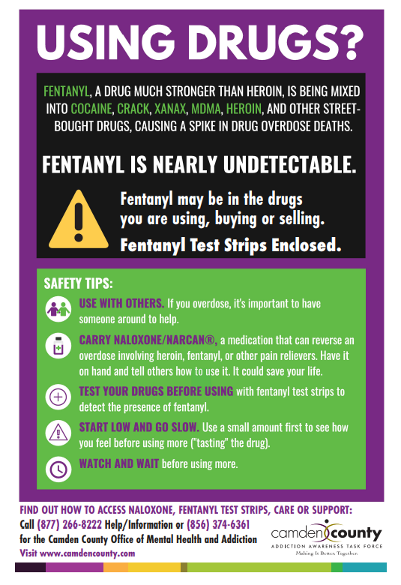 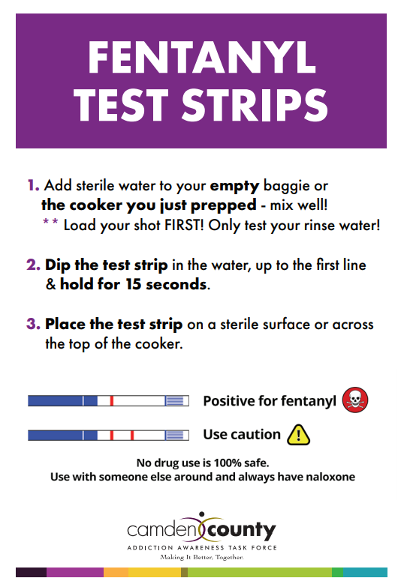