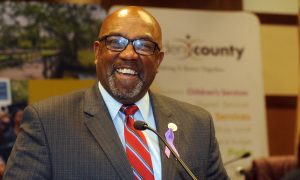 (Camden, NJ) – Camden County Freeholder Jonathan L. Young, Sr. has been named the 2020 Maurice Fitzgibbons Freeholder of the Year by the New Jersey Association of Counties (NJAC). He has been a public servant for more than a decade in the county in various capacities and has now taken the organization’s highest honor for his service.

“It is truly a humbling experience to be recognized by my peers throughout New Jersey’s 21 counties,” Young said. “It is my honor to serve the residents of Camden County and I thank NJAC for selecting me for this year’s award. I’m looking forward to continuing my commitment to make county government more effective and efficient for our taxpayers.”

Young has served as a Freeholder since January 2015 and oversees numerous Camden County Departments including Public Safety; Economic and Workforce Development; Sustainability; and, Corrections and Juvenile Justice.

Earlier this year, Young was among 17 black freeholders that called for the end of the use of the archaic term freeholder for county officeholders. Young noted that the history of the term freeholder is rooted in misogyny, racism, and privilege. He urged the adoption of the more fitting title of commissioner to encourage diverse voices to join the ranks of public service and to represent the inclusive government we strive for today.

The Freeholder of the Year Award is named for Maurice Fitzgibbons who served as a Hudson County Freeholder at the time of his death in 2010 and was past president of NJAC. Young will be recognized during the December 11, 2020 NJAC board meeting which will be held virtually.