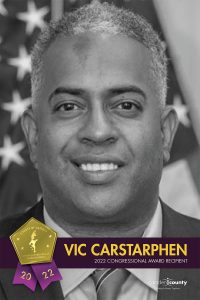 Victor Carstarphen, resident of Camden City has been serving the community, especially the youth of the city long before his inception as Mayor. Victor was born and raised in the City of Camden and educated through Camden Public Schools up until high school graduation. As one of the most decorated basketball players in Camden High School History, Mayor Carstarphen used his experience to give back by serving as a coach to the Camden High School Boys Basketball team for six seasons. He also served his community as a board member for more than a decade with the Camden Educational Foundation. Through this role, he helped provide over two-hundred and fifty college scholarships to students graduating from the Camden City School District. Furthering his dedication to the community, Mayor Carstarphen was appointed to the Camden City Council in January 2020. In May 2021, he was appointed as Mayor of the City of Camden and was re-elected to serve his community in November 2021. Over the past decade the City of Camden has made much progress under his leadership. Mayor Carstarphen and his team continue to work with police to keep the city as safe as it has been in 50 years while also implementing programs to eliminate structures at risk of collapsing and to stop trash and other contaminants from being illegally dumped in the city. Mayor Carstarphen is working to strengthen the public health of the community by investing in senior centers, creating athletic and recreational opportunities for our youth, increasing vaccine access, safely returning our children to school, investing in rental assistance and addressing homelessness. He understands the importance of working with members of the community to develop a vision for the future of the city’s neighborhood parks. The recent opening of the Cramer Hill Waterfront park provides residents of the community with direct access to the waterfront, three miles of walkable paths and an opportunity to reconnect families with the outdoors right in their own neighborhood. Finally, Mayor Carstarphen and his administration are dedicated to bolstering the city’s economic opportunities by creating an environment to attract new businesses to rebuild the city’s economy and nurture the rich cultural and arts history that exists within the city.