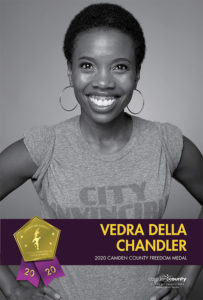 Vedra is a lifelong Camden resident who has made a difference in the quality of life in Camden City, as well as Camden County. In April of 2015, upon returning from a world tour in the field of entertainment, this Harvard graduate began contributing to the city by discreetly visiting communities and picking up litter. Her pro bono work was noticed. She then connected with The Neighborhood Center as a volunteer developing programs for teenagers after school. She helped to establish an after-school program, inviting friends and family members to come and speak to teens about career choices and other meaningful topics. As an experienced entertainer, Vedra has performed for no cost at various free Camden City concerts and assisted in the revival of The Ritz Theater in Oaklyn, NJ. Her active role on the Board of Directors, recruiting, managing and performing, has helped to bring new energy to the theater and the community.