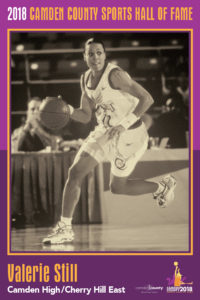 Valerie Still was born and raised in New Jersey. She obtained her undergraduate BS degree in Animal Science/Pre-Vet at the University of Kentucky, a MA in African and African American Studies and is currently finishing her PH. D in Sports Humanities at The Ohio State University where she was a Graduate Research and Teaching Associate.

Valerie was one of the first female athletes to receive an athletic scholarship shortly after Title IX was passed in the 1970s, breaking down traditional sexist ideology about women and sports. She was a member of the University of Kentucky women’s basketball team from 1979-83. She led UK in becoming one of the nation’s top programs and nationally ranked. Valerie became a three-time All-American and still holds the University of Kentucky career records (men and women) in scoring (2,763) and rebounding (1,525). She was also a member of the USA National team.

Prior to starting her writing career, Valerie enjoyed resounding professional athletic success on two continents. She was a nine-time all-star in the Italian women’s professional league; leading the league in scoring several years and winning an LEGA championship with Pool Comense in 1991. While in Italy she hosted her own television show and was a TV commentator for men’s basketball. She returned to the USA and in 1996 played in the American Basketball League (ABL), a newly formed professional league for women. She won two world championships with the Columbus Quest and was MVP for both championship series. After the ABL folded she joined the Women’s National Basketball Association (WNBA), playing with the Washington Mystics.

After retiring from playing she became a WNBA assistant coach with the Mystics and later with the Orlando Miracle.
An accomplished musician, Valerie has been a pianist for numerous bands and choirs and a singer with several musical records to her credit. In 1998, she founded the Valerie Still Foundation, a non-profit organization that assists youth in their development, and in particular, helps young girls grow into mature women through innovative programs.

Today Valerie focuses on writing and working with youth, including giving educational presentations in schools across the country, encouraging young people to write and tell their own story. Her latest research is groundbreaking, uncovering a critical family secret that has lasted over 200 years. She is a published author and co-owner of STILL Publications. The first two volume of Still Alive on the Underground Railroad: Recollections of an American Family, a youth series based on her family history, was released in 2012 and 2013. Her memoirs, entitled Playing Black and Blue: Still I Rise were released in April 2018. Recently she was a recipient of the Jefferson Award, America’s most prestigious celebration of public service. She is also the president of the Dr. Clarence B. Jones Institute for Social Advocacy

An adventurous spirit, Valerie was a cast member of the reality TV show, “Mom’s Got Game” which aired on the Oprah Winfrey Network in 2014. She now resides in New Jersey.