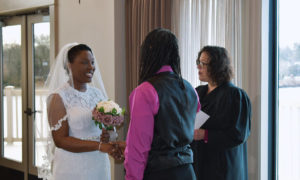 Camden County Surrogate Michelle Gentek-Mayer officiated the wedding of Benjamin Stroud, a disabled Army veteran from West Atco who served overseas in Iraq, and Monique Anderson of Sicklerville. The couple first met in the fifth grade and were prom dates in 1998. They tied the knot alongside three other couples who had decided to exchange their vows this Valentine’s Day.

“On a day dedicated to romance, we couldn’t be happier for these couples as they choose to commit their lives to one another, embarking on a new journey as partners in life,” said Surrogate Gentek-Mayer. “I’m honored to attend and officiate this ceremony, and to have a role in these real-life love stories.”

After high school, Benjamin joined the military where he was a computer systems analyst and operator. He was stationed at Fort Hood, Texas, after serving in Iraq. After more than 20 years apart, Benjamin and Monique were reunited and rekindled the love that once made them high school sweethearts.