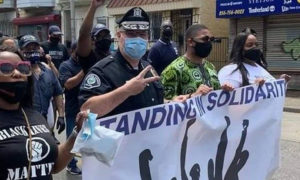 The statement below is by Freeholder Director Louis Cappelli Jr. on behalf of the Freeholder Board regarding yesterday’s unity walk.

“The unity walk and gathering yesterday on the steps of the police administration building was the culmination of years of outstanding work by the men and women of the Camden County Police Department, the city’s clergy, residents throughout Camden, and our community’s leaders. Direct interaction, relationship building, and community policing has been the bedrock of our agency since it was started in 2013 and has made a tangible difference in the city. The agency’s daily efforts to engage residents, adopting the most progressive and effective use of force policy in the nation, and constantly training all officers on the sanctity of life has made an out-sized difference in the city and the county. In turn, that strong level of engagement and communication also provides residents with the knowledge that we stand with them, we grieve with them, and that the ugly, tragic and appalling events that led to the murder of George Floyd in Minneapolis will never occur here.”

“Yesterday the CCPD, clergy, and community leaders marched through the city to stand in solidarity and unity with all residents who are rightfully angered, concerned and upset about the actions of the officers in Minneapolis and the murder of George Floyd.  We know that together we are stronger, we know that together, in the city of Camden, we can create a space where policing is focused on deescalation and dialogue. When our officers are deployed on the street and in the neighborhoods they are committed to preserving the sanctity of life and building a stronger city. Yesterday, was another example of our ongoing engagement, and a very real dialogue, that we are having with residents throughout Camden that has made our agency part of the fabric of this city.” — Chief Joe Wysocki