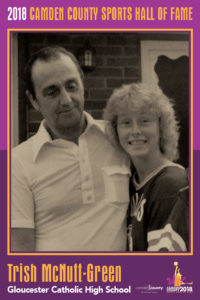 Trish McNutt Green put thousands of balls through the net as a teenager growing up playing for the Lady Rams in the 70s and early 80s. In the game of life, however, lay-ups have been hard to come by.

Her introduction to organized hoops came as a member of St. Margaret’s RC Church in Woodbury Heights. “My father took me to watch the Gloucester Catholic girls, and I loved it. I knew then I wanted to play before big crowds,” she said.

When her turn came to lead the storied Lady Rams, not only were there three new state championship banners in the gym but Trish was selected the best player .in New Jersey before graduating in 1982.

Title 9 was revolutionizing the sports world, opening the door for girls to claim millions of dollars in scholarships to even the playing field in accord with new federal legislation. Also during this period, AAU basketball was gathering momentum.

Trish was the target of recruitment efforts from big-name schools all over the country before choosing up-and-coming Fresno State in California and its family atmosphere. Life was good. Until Game Six of her freshman year.

“I blew out my knee – the ACL plus ligaments, tendons, everything,” she recalled. “At that time rehab was a three-year process.” Many dark days followed as she gradually came to terms that her comeback dream was just that, a dream. Meanwhile, the school’s family atmosphere kicked in and she got through the biggest setback of her young life. “I became everybody’s daughter at Fresno State,” she said.

Then another stab through her heart came out of nowhere, like a tornado. Her beloved father Jack collapsed and fell into a three-month coma, leaving him a vegetable in need of 24-hour care for the subsequent eight years. Instead of going back to Fresno State, where her scholarship was still in effect, she remained in South Jersey with her mom to care for dad.

Meanwhile, she cobbled together enough credits to earn a bachelor’s degree in teaching from Rowan University, then landed a job at GSIT High School in Gloucester County. Soon, her passion for hoops drew her back in when she found out the Lady Bulldogs of Haddonfield Memorial High School needed a coach. She applied for the part-time job to bring that under­ achieving program back to respectability. Her approach to coaching was much like her playing style – all in, fast break, running and gunning for scoring opportunities for the entire game.

Practices were inconveniently at night because of her day job. Most of the girls decided it was actually okay to return home later at night exhausted but feeling good that they had won Trish’s precious approval oftheir efforts.

Plus, the hard work paid off big time with winning three state championships. Trish was tough but tender. The girls and their families bought in. She and the other Bulldog coaches also had a secret weapon in the person of HMHS athletic director John Horner, who instructed them to be the best coaches they could be and he would shield them from meddlesome parents and other distractions.

But as she surfed the waves of success, storm clouds gathered, starting with the departure of her friend and confidant, John Horner. The glow of championship years faded and so did the all­ in commitment Trish demanded. Soon, controversy ensued and, eventually, a heartbroken Trish packed her stuff and watched HMHS disappear in the rear view mirror.

At the same time her marriage (to a high school basketball coach, of course) was falling apart and the couple divorced. Trish became a single morn overnight and her top priority was guiding her two teenage sons through the shoals of the emotional shock.

Again, the powerful and spiritual call of basketball entered her life, for by this time the AAU had come into play as a more fertile ground than high school for college recruiters. She signed on as a coach with the Philly-based Rebels organization, where she and is still molding student athletes into mature, responsible women.

Kara Shuttleworth, now 20, played for Trish as a Rebel in 2013 and 2014. She says Trish was indeed demanding but a great coach whose command of the game and the human spirituality that goes with it earned her respect from the players. “I would call it a form of ‘tough love,” Kara said.

Trish now has a new love in her life, another coach naturally (P.J. Crawford, the Camden Catholic legend). “I have never been happier,” she said.