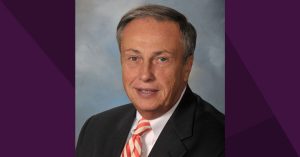 “Martin’s love for New Jersey and the practice of law brought his impact to practically every sector of life in the Garden State. He served as legal counsel for the Diocese of Camden for decades, as a trustee for Cooper Medical School of Rowan University, as the attorney of record for the Camden County Board of Social Services, as Chairman of the Board of Trustees of the Camden Free Public Library, and as a Commissioner of the Camden County Municipal Utilities Authority, among other myriad support and advisory roles in addition to his professional law duties. His commitment to the betterment of public life for residents in our community was rivaled only by his unlimited capacity for reflection, analysis, and spirited debate. His loss will be profoundly felt throughout the institutions where he served and throughout the Diocese of Camden. We ask that the community join us in keeping Martin and his family in your thoughts and prayers.”

“Martin McKernan, Jr., channeled his devout faith as a Roman Catholic and his unmatched expertise as a lawyer to better the lives of innumerable Camden residents. He spent his life in service of others, serving in the U.S. Army Reserves, as Camden’s youngest city attorney, counsel for the Camden Redevelopment Agency, and as a lifelong advocate with dozens of committees, organizations, and working groups focused on law and public policy. We are deeply saddened to learn that this thoughtful, affectionate pillar of the city has passed. Our thoughts and prayers are with his family and those he touched in our community.”

“Marty was a beacon over troubled waters, he was the lighthouse in a storm keeping so many friends and clients from foundering on the rocks. He became a dear friend and confidant to me from the moment I met him in 1988 and someone that I personally know dedicated his life to making Camden City a better place for our residents. He was a gentleman and statesman at all times and treated everyone, from the janitor to the Governor with the same respect regardless of station. Whether it was providing free legal services, reviewing U.S. Supreme Court cases, or building new senior housing through the church, he was one of the most thoughtful individuals I have ever known. Marty’s 50 years in the legal world and his commitment to the city have been unmatched, his benevolence to his fellow man and his integrity in everything he did was unparalleled. If there was a civic pursuit that made positive change in the city you could probably find Marty working on its behalf as a board member or as counsel. My heart goes out to his family and his loved ones, there is no question in my mind that today marks a period where the world is a little darker because we no longer have Marty in it. That said, I know his light and legacy will shine on through the people he has helped over the years and the many lawyers he mentored and taught throughout his career.”