Statement From Freeholders Young and Holcomb Regarding Juneteenth 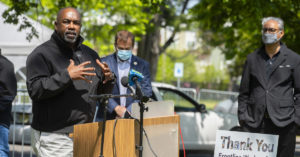 The statement below is by Freeholders Jonathan Young and Barbara Holcomb on behalf of the Freeholder Board regarding Juneteenth.

“Today we find ourselves in a moment of reckoning in America. The murder of George Floyd, and other recent highly visible acts of racism, have spurred a national conversation about our history, how we recognize it, and how much we still have to overcome. It is fitting that in the midst of this moment we have the opportunity to recognize the anniversary of the end of slavery, Juneteenth, the day the last slaves in America learned of their emancipation ordered by President Lincoln.

Dr. Martin Luther King Jr. once famously said that ‘the arc of the moral universe is long, but it bends towards justice.’ Juneteenth itself speaks to this notion that progress is slow and painful. The holiday does not mark the day President Lincoln’s Emancipation Proclamation was signed, September 22, 1862, nor the date that it became effective, January 1, 1863, but instead it celebrates the day that the last slaves learned of their freedom, more than two full years later on June 19, 1865. When we consider that slaves remained in chains for 30 months after they were to be freed, it comes as no surprise that so many societal ills remain with us today, 155 years later.

Right now, Americans are feeling the frustration that accompanies a long arc toward justice. However, Juneteenth is an opportunity for all Americans, not just African Americans, but all of us, to reflect upon and consider our nation’s history. Today is an opportunity for each of us to consider why 155 years after the last slaves were freed, we still face the societal inequities and inequalities that we did decades or a century ago. Our hope is that in recognition of Juneteenth, all Americans will seriously consider how they, as an individual, can help to create a fairer, more just society, and how they can help to make the arc of the moral universe bend towards justice more sharply.

Moving forward, as a board we believe this hallowed day should be recognized and celebrated as a national holiday. Furthermore, we want to see curriculum changed in every school to represent this day and to further teach and learn the stories in our nation’s history of African American people that have been buried for more than 250 years.”