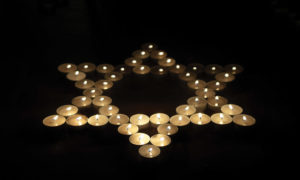 “With each passing anniversary of the Holocaust, we must again resolve to never forget the atrocities that brought the death of millions of European Jews or the forces which allowed such destruction to be wrought.  Seventy-five years after the liberation of Auschwitz, we face a world where anti-Semitism, racism, bigotry, and hatred, appear to be resurging in communities across the United States, and around the globe. Today, as we mourn those lives lost and affected 75 years ago, we have fewer voices with us who lived through those tragedies, and that makes it all the more important that we make sure we’re listening while we still can.

While the Nazi regime stands unrivaled in history for its malevolence, we must take care not to ignore the malign influences which allowed the revolting ideologies of hate to spread and take hold amongst its supporters and allies. Hate-based ideologies do not develop in a vacuum, they are the product of fear, distrust, and disinformation, all exacerbated by corrupt actors in the name of political expediency. These seeds, once planted, grow rapidly under a sun of silence, and it is because of this that we must call out injustice whenever and wherever we see it.

The only way to properly honor the legacy of those who lived the torture of Auschwitz is to defend others, to stand with those who are different than ourselves, and to ensure that such things may never happen again. Today, we mourn those who we’ve lost, we celebrate the liberation of those who survived, and we reaffirm our refusal to let hate win.”