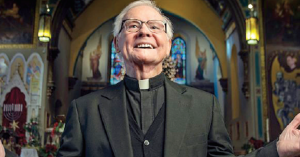 The statement below is by Commissioner Jeffrey Nash on behalf of the Board of Commissioners in regard to the passing of Monsignor Michael Doyle:

“Monsignor Michael Doyle was a true humanitarian who worked tirelessly to improve the lives of Camden City residents for more than 50 years. I was first introduced to Monsignor Doyle when he was featured on 60 Minutes when I was still in New York attending law school. That segment featured an amazing priest who devoted his life to the residents of the impoverished Waterfront South community in Camden. Little did I know at the time but this Priest, who was born and raised in Ireland, would eventually become my hero and inspiration.

Through my years in public office, I worked side by side with Monsignor Doyle on many projects. He was the driving force behind the CCMUA efforts to dramatically reduce its odor at the plant, prompting the CCMUA to invest millions in capital improvements for that purpose. He always worked to open Camden waterfront properties to the residents, using the compelling metaphor about how the flow of the river equates to the flow of life. That passion was inspirational in the community effort to have the state remove the Riverfront State Prison from the Camden shore. After that successful effort, Monsignor Doyle wrote me a poem about the prison demolition which is one of my most treasured possessions. In the 1970s and 80s, Doyle also launched a housing program that led to more than 100 new homeowners in the cityas well as a community food pantry and food sharing program. Doyle devoted his entire existence to helping those in Camden City achieve the best quality of life that they possibly could.

Monsignor Doyle would mesmerize everyone he spoke to with his stories. He would recount the time he and others were charged and tried for destroying draft cards at the Post Office during the Vietnam War. My favorite was his description of when Mother Theresa visited Sacred Heart; he had the honor of presenting a gift to a little five-year old named Dana Redd who had recently lost her parents. As Mother Theresa hugged the little girl, Monsignor Doyle describes a beam of light piercing through the Church’s stained-glass window, blessing the little girl to save the City of Camden. To this day, that story fills my heart with such an indescribable sense of joy and amazement.

I am Jewish but have attended Midnight Mass at Sacred Heart for many years. I have done so because I always want to hear Monsignor Doyle share his holiday message with his congregation. It is an uplifting, inspirational and joyful service lead by a unique and loving man who I am honored to have called my dear friend. His impact on Camden City has been remarkable and I’m confident that without him, this community would not be where it is today. His complete sense of selflessness and undying love for the residents has improved this city in so many ways. His spirit will live on for generations to come and we will never let his legacy be forgotten.