State of the County 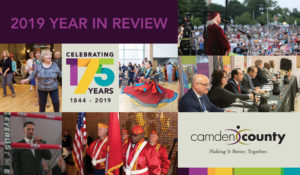 The statement below is by Freeholder Cappelli in regard to the annual state of the county address for 2020.
“Good afternoon everyone and thank you for being here. I want to start off by saying that as we enter our 176th year, the state of the county is strong. Thanks to our dedicated and caring residents, the resiliency of our communities, and expanding economic opportunity for all, we enter this new year with limitless possibilities ahead.
For the past 12 months we have celebrated the 175th anniversary of Camden County’s incorporation. We sought to do this in two ways: by hosting 175 events where we could come together for a shared experience, goal, or purpose; and by tirelessly striving to improve the quality of life, access to opportunity, and availability of resources. Through both, we sought to make Camden County a place that you would be proud to call home.
Today, we begin not only a new year but a new decade. In doing so I want to take a moment to highlight not only the accomplishments of the last 12 months, but some of the milestones we accomplished in the last ten years.
We began the decade in a precarious position, gripped by the worst economic recession since the Great Depression. While today’s national economy may be growing, many of us remember the sleepless nights all too well, lying awake worried about losing a job, how we would pay the cable bill next month, how would we save for retirement? But, our community didn’t give up. You supported one another and took advantage of every chance that became available. Today, incomes are rising, poverty is decreasing, and unemployment is at incredible, record lows. The state of today’s economy in Camden County is due in large part to your resilience and willingness to persevere.
Two years into the decade we faced a seemingly insurmountable obstacle in our mission to reinvigorate Camden City. In 2012, 67 people were murdered in the City, a grisly record that forced strong action and a serious moment of self-reflection for not only members of this board and those in the community, but for individuals all over the state of New Jersey who wanted to see the City Invincible return to its former glory. In 2013, we launched the Camden County Police Department and brought with it a radical idea about how policing in America could look. Our officers, at the direction of Chief Scott Thomson, committed themselves to a new model of community policing that was later heralded by President Barack Obama as a model for the nation. In 2017, murder was down more than 65 percent. Since 2012, violent crime has dropped by 42 percent.
I’d be remiss if I didn’t take a moment to highlight the vision and leadership of Chief Scott Thomson, who retired earlier this year. He took the reins of a grand experiment where few outside of our borders believed he could find success. Ultimately, he turned the CCPD into a vital partner for the communities in Camden City, and he transformed the narrative of Camden City from one of bleak desolation to one of unprecedented hope. We are eternally grateful for his service.
It should be noted as well that the man who has filled Scott’s shoes, Chief Joseph Wysocki, has taken over the role without missing a step and is doing a tremendous job since taking over. We are extremely grateful for his public service and for the leadership he has brought to the department.
Elsewhere in the county, we focused our attention on not only public safety, but on public spaces. Over the decade we invested tens of millions of dollars into our park infrastructure, green spaces, and natural resources. In 2011, with our partners at Build Jake’s Place, we opened Jake’s Place at Challenge Grove Park, a first-of its-kind all-inclusive playground for children of all abilities. In 2017, we completed the long-needed dredging of Cooper River and saw the return of nationally-renowned rowing to our shores. In fact, this year we welcomed the Gold Cup, a gathering of the world’s best individual rowers to Cooper River, making our river an internationally recognized venue for the world’s top athletes. Just a few months ago, we opened Gateway Park along Admiral Wilson Boulevard, fulfilling a promise made more than 20 years ago when the vacant and dilapidated businesses that once stood on that site were torn down.
Of course, there were countless other projects heralded by the Parks Department and the incredible team of professionals who are focused on making Camden County a place where we can live, work, and play. Thanks to their hard work, the county has built one of the best park networks in the nation, and there is more still to come.
I could spend all of 2020 just highlighting the incredible work and accomplishments that I’ve seen in Camden County over the past decade, but there is still too much work to be done. Instead, I’d like to begin looking forward and focusing on where we plan to take our community in the next 12 months and beyond.

On January 1, we took the dramatic but necessary step of eliminating all single-use plastics from county facilities and events. Many locations throughout the county have already switched to sustainable, compositable alternatives, and the others will be phasing out plastics in the coming months as their current stock is depleted and their supply contracts end. In 2020, we are focused on sustainable habits and on finding ways to reduce Camden County’s contribution to environmental degradation and climate change. Right now, our thoughts and prayers are with the people of Australia who are living through a catastrophic natural disaster that has been fueled by a rapidly changing climate. It is a stark reminder that we are nearly out of time to address this existential threat.

It’s not only ecological health that we’re focused on, but public health as well. During the last decade, we watched as an epidemic of opioid and substance use disorder gripped our communities and robbed us of the lives of too many young people. As a father, I take this issue very seriously. No parent should have to watch their child succumb to a preventable overdose. We cannot continue to enable the cycle of addiction and drug-related death.
This year, the Board is expanding and continuing several programs we believe to be critical to ending the opioid epidemic. This month, the Addiction Awareness Task Force will resume offering free Narcan training sessions, enabling ordinary community members to save a life during a moment of crisis. In the jail, recent grants now allow us to expand the Medication-Assisted Treatment program which will help reduce drug-related recidivism and overdoses among our formerly incarcerated population. In our communities, we have expanded the groundbreaking Project SAVE Program, which focuses on early invention for low-level offenders suffering from a substance use disorder. Together, we are prepared to attack the scourge of opioid abuse from all angles, and make our community a safer, healthier place.
In addition to safer parks, and safer homes, the Freeholder Board is continuing to identify public infrastructure such as roads, highways, and bridges, in need of repair or restoration. Each year the Board invests millions of dollars in the upkeep of our infrastructure as well as for major projects. In the coming weeks and months our crews will complete significant improvements along Chapel Avenue in Cherry Hill, Haddonfield-Berlin Road (CR 561), and new storm water enhancements throughout our network. As always, we will continue to connect with municipal leaders and residents for help identifying where significant upgrades can be made and are needed.
While many of these initiatives have been ongoing or occur each year, 2020 will represent a unique opportunity for our community. The decennial census count, which dictates the size of our representation in Congress, our federal funding allocation, and a variety of other critical measures, will be completed over the next 12 months.
We began connecting with our federal, state, and local partners last year to ensure a strategic, comprehensive approach to our Census efforts. Camden County is home to several, hard-to-count communities in both urban and rural areas, and we are working to ensure that everyone participates and gets counted. We are determined not to let this opportunity get away from us, as several of our communities have been undercounted in recent years, resulting in the loss of needed funds and even a lost congressional seat.
I want to highlight and thank Freeholder Carmen Rodriguez for the time and effort she has already spent helping to educate the public, and prepare for, the census, especially in the City of Camden. Her dedication and passion for this issue has undoubtedly increased the percentage of those who plan to participate, and we want to thank her for the work that she has already done and continues to do.
As we head into this 176th year in Camden County, we have so much to look back on, and so much more to look ahead to.
This year, we will continue to expand economic opportunity, protect the vulnerable in our community, push to make our communities safer, and ensure that our residents get their fair share of resources, funding, and representation.
I want to thank everyone for being here today and for their continued commitment to bettering our community. I also want to thank my fellow freeholders, as well as the public servants and employees that work to make Camden County a better place each and every day.”

Biggest Stories of the Year

After Nearly 20 Years, Gateway Park Opens to the Public
Tapinto-Camden

Want to report a crime tip in Camden? There’s an app for that.
Philadelphia Inquirer

Police must first do no harm’: How one of the nation’s roughest cities is reshaping use-of-force tactics
The Washington Post