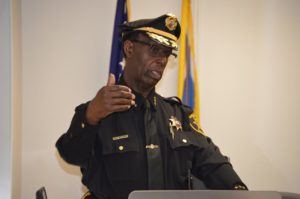 (Camden, NJ) – Over the weekend, members of the Camden County Sheriff’s Office received information regarding fugitive, Jeani M. Hull, staying in Camden City. Hull, 32, was wanted in Gloucester County on a warrant for endangering the welfare of a child leading to the juvenile’s death.

Camden County Sheriff’s officers, working with the U.S. Marshal’s Service and the Gloucester County Prosecutor’s Office, identified her location through strategic analysis. Then, at approximately 7:30 p.m. on Friday, May 15, she was spotted in the woods adjacent to Ferry Avenue in South Camden by Camden County Sheriff’s Officers. The suspect refused to surrender to the officers and tried to flee the scene, but was taken into custody after a two block foot pursuit.

“This multi-pronged effort by several units of the Sheriff’s Office, Marshal’s, Task Force, Deptford Police Department and the Gloucester County Prosecutor’s Office, got a suspect off the street that was wanted in other jurisdictions for serious crimes,” said Camden County Sheriff Whip Wilson. “This was a true team effort, and everyone executed their tasks flawlessly getting the suspect into custody in a timely manner and without a hitch.”

Hull was arrested and charged with an additional count of resisting arrest by the Sheriff’s Office on top of her current sentencing warrant for endangering the welfare of child. She was transferred back to the Deptford Police Department after she was taken into custody.