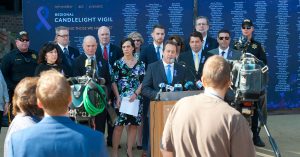 (Gloucester Township, NJ) – After years of litigation that began for Camden County in 2018, the first of several settlements between pharmaceutical companies, distributors, retailers and the state of New Jersey have been finalized. Based on this settlement with the four companies, Johnson & Johnson, which manufactured opioids, and the country’s three largest pharmaceutical distributors – McKesson, Cardinal Health, and AmerisourceBergen, the state of New Jersey is set to receive $641 million. Those funds will be funneled down to counties and municipalities to assist in cleaning up the public health crisis created and fomented by these corporations.

Over the course of the next 20 years, this settlement will pay almost $32 million to Camden County, several municipalities and over 10,000 residents inside the county. This money will be earmarked for treatment, education and harm reduction. The Commissioners will be the first in the state to appoint a commission to oversee the funds per the state Attorney General’s directive of this settlement.

“This settlement is a step in the right direction and brings some level of accountability to the companies that provided the spark that set the fire to one of the largest public health crisis’s in the last 100 years that continues to grow by the day,” said Commissioner Director Louis Cappelli Jr., who also serves as the liaison to the Camden County Addiction Awareness Task Force. “These funds will allow us to start properly funding an infrastructure that will assist our community in addressing and intervening with residents that are suffering under the strain of opioid use disorder. We are looking at numerous options to assist people with various obstacles, from families struggling making medically assisted treatment more accessible to aiding case managers in our municipal courts. Furthermore, we will be investing in new treatment opportunities, so we can improve and enhance our social service providers ability to reach out to those in throes of this insidious disease. Today is a bright spot for the counties that have suffered disparately from the flood of opioids into our region. Nevertheless, it does nothing to bring back the thousands of poor souls that have been a victim of this crisis over the last 10 years.”

The National Institute for Drug Abuse reported 2020 had been the largest increase in fatal overdoses since 1999. According to the Centers for Disease Control and Prevention, approximately 57,000 people died from synthetic opioids (predominantly fentanyl) last year, compared with around 13,000 people who died from heroin overdoses. Furthermore, the National Institutes of Health reported that the COVID-19 pandemic and the opioid crisis are whipsawing the country with deadly effects.

Congressman Donald Norcross has been an advocate and an ally of the Camden County Addiction Awareness Task Force since its inception and has called for accountability from these corporations from the beginning.

“The damage done to our community by the companies that profited from the opioid epidemic is unimaginable,” Norcross said. “While no amount of money can make up for the lives lost, I am proud to see Camden County come together to invest in programs and support services to help us heal. Together, we can end the opioid epidemic as well as the stigma that creates barriers to receiving treatment for opioid use disorder.”

In Camden County, a recent review of overdose fatalities revealed 70% of victims had fentanyl in their toxicology screens and 93% had opioids. Unlike other places in the nation, the county, through a mix of treatment services, education and intervention services, has seen a drop in fatal overdoses since 2019 from 329 to 290 in 2021. Nevertheless, fatal opioid overdoses continue to be one of county’s largest killers.