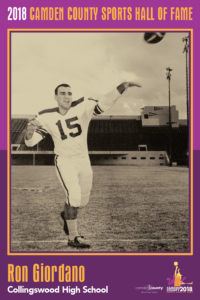 Ron states, “we had a close group of guys who loved sports at Collingswood High School. I was fortunate enough to be the QB on our undefeated Group IV Champions team (The Golden Eleven).” He was an All Group IV 1st team member, a starting guard in basketball. His Coils team were runner­ ups to the great Camden High team led by Ron (Itchy) Smith and Sonny Sunkett, losing 3 games to them by a total of 7 points.

Ron attended Bucknell University. He went from being the 4th string QB at the start of his Junior year to becoming the starter in the 4th game of that year.

In 1962, Ron was selected MVP of the Middle Atlantic Conference, whose teams included Delaware, Temple, Lehigh, Lafayette and Colgate. By the time his career was over he set 11 school passing and total offense records, including total completions, total yardage and touchdowns. Some of these feats stood for 20 years.

He was named to the AP Little All America and All Mac Teams. He was also named to the ECAC All East Team and All PA 2″d team.
He was invited to play in the Gem City Bowl Game and the All-American Bowl in Tucson, Arizona, where he was on the winning team of Little All-Americans that beat a team of major college players, which featured Bobby Bell, an All-American later to become an All-Pro linebacker.

It was then off to the service for 2 years where he played QB for the Fort Eustis Wheels which had an outstanding squad that played Ft. Benning in the Missile Bowl in Lakeland, Florida.

It was then back to New Jersey, when on a night of cabareting, he met his wonderful wife at Schilligs Black Horse Farms Nightclub.
Ron and Joan will be married 50 years tomorrow October 26th• Their daughter Kit and her husband Alejandro have produced two lovely granddaughters Lena and Dom, the loves of their lives.

Ron will tell you what this outstanding award means to him.