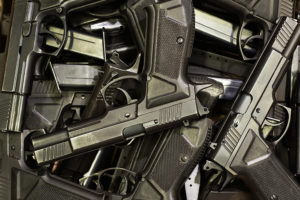 (Trenton) Attorney General Gurbir S. Grewal today announced that a state grand jury has returned an indictment charging seven members of a major gun trafficking ring in Camden with first-degree racketeering, including the alleged leader of the ring, his “straw purchaser” in Ohio, and five middlemen who allegedly brokered black market sales of guns – including assault rifles – to criminals in the city.

These men are charged with racketeering (1st degree), conspiracy (2nd degree), and transporting firearms into the state for illegal sale (2nd degree) for allegedly trafficking guns from April 2016 through July 2017:

The following five men, including two cousins of Scott (Moore and Jennings), allegedly were “middlemen,” acting as wholesale distributors who arranged sales of the guns in Camden after Scott purchased them in Ohio through Hammond:

“Dismantling prolific weapons trafficking is the best way to reduce the number of illegal guns being sold to criminals in our communities and used to inflict murder and terror,” said Attorney General Grewal. “Each gun that we seize or prevent from reaching the street represents countless lives saved. The potential sentences that these men face should also serve as fair warning to those who illegally traffic firearms into New Jersey.”

“More than three out of four of the guns recovered in New Jersey and traced by the ATF in 2016 originated in other states,” Attorney General Grewal added. “Simply put, to reduce gun violence in our communities and reduce the threat to our police officers from assault rifles and other illegal firearms, we need to stop the flow of illegal guns into our state. We are committed to putting an end to this iron pipeline of firearms.”

“We are working closely with the State Police and our other federal, state and local law enforcement partners to arrest the gun traffickers responsible for the proliferation of lethal firepower on our streets,” said Director Elie Honig of the Division of Criminal Justice. “Through this far-reaching investigation, which extended to Ohio and West Virginia, we were able to bring first-degree racketeering charges against this criminal ring.”

“The only purpose Scott and others had by flooding the Camden area with illegal guns was profiting off of the innocent lives of area residents,” said Colonel Patrick Callahan, Acting Superintendent of the New Jersey State Police. “I am very proud of the investigative efforts and solid police work exhibited by the members of the New Jersey State Police Trafficking South and Fugitive Units along with our federal, state and local partners.”

“All of these men have allegedly played a role in contributing to the violence in Camden,” said Valerie A. Nickerson, Special Agent in Charge of the DEA’s New Jersey Division. “They showed no concern for the violence which may have resulted from their actions. The men and women conducting this investigation are dedicated to reducing gun violence in the community.”

“We appreciate the efforts of our law enforcement partners to remove these guns from our streets,” said Chief Scott Thomson of the Camden County Metro Police Department. “These high capacity firearms would have been used to undermine our community and destabilize our neighborhoods, so making these arrests and eliminating this pipeline was imperative for the safety of our city.”

“This firearms trafficking case represents the highest level of cooperation, across multiple agencies, jurisdictions, and states,” stated Trevor Velinor, Special Agent in Charge of ATF’s Columbus Field Division. “There is no place in our society for those who use firearms for criminal purposes, nor is there a place for those who supply criminals with those firearms. ATF is proud to work with our law enforcement partners to stop those who would foster violence in our communities.”

Scott and Caban were arrested previously and ordered detained pending trial in New Jersey. The following men were arrested on warrants after the indictment was returned, and the Attorney General’s Office is seeking their detention: Moore, Jennings, Folk and Harville.

The investigation led to a separate indictment on Feb. 6 charging Caban and Baron Coleman, 38, of Philadelphia, Pa., with second-degree conspiracy to distribute heroin. Caban also is charged with first-degree distribution of heroin for allegedly conducting multiple sales of heroin from May through August 2017. Coleman allegedly supplied heroin to Caban, who in turn allegedly supplied heroin to other dealers in Camden. When DEA Philadelphia Group 31 arrested Coleman and executed a search warrant at his home, they seized a kilo of heroin and a kilo of cocaine.

The investigation began when the New Jersey State Police, the DEA Camden HIDTA Task Force and the Camden County Metro Police Department developed information that Caban allegedly was trafficking both heroin and guns in Camden. It is alleged that during the course of the investigation, Caban illegally sold 10 guns that were recovered by the investigating agencies, including two illegal assault rifles with large-capacity magazines, six 9mm pistols, four of which had illegal large-capacity magazines, a .45-caliber pistol and a .40-caliber pistol. The investigators learned that Caban allegedly was obtaining the guns from Scott. That was further corroborated with evidence seized by the West Virginia State Police when they arrested Scott during a motor vehicle stop on July 9, 2017. Meanwhile, the New Jersey State Police traced the weapons to Hammond in Ohio. Working with the ATF and the U.S. Attorney’s Office for the Southern District of Ohio, which already were investigating Scott and Hammond, investigators learned that Hammond allegedly had been buying multiple weapons at a time for Scott, including assault rifles, at stores around Columbus, Ohio, or online through a website that features classified ads marketing firearms.

The investigation revealed that Hammond and Scott would go together to stores, where Hammond would buy multiple guns for Scott. It is alleged that Scott would then take photographs of the guns and text them to his middlemen in Camden, who would find individuals to purchase the guns for prices set by Scott. The middlemen allegedly would add a “tax” to the price set by Scott and keep the tax as their profit. Once Scott had orders in place, he would drive to Camden to deliver the weapons to his middlemen. On some occasions, Scott would be paid via money transfers, but mostly he collected cash from the middlemen. Scott himself never conducted the sales with the ultimate purchasers. Hammond at times allegedly traveled with Scott to Camden to deliver the firearms to the middlemen. The assault rifles were resold for up to $2,000. Hammond allegedly purchased more than 30 firearms that were trafficked into Camden by Scott and the other defendants. A total of 17 guns linked to the weapons trafficking ring were recovered in the investigation, including 14 handguns, two AK-47 assault rifles, and an AR-15 assault rifle.

Attorney General Grewal commended the following agencies for their work on the indictment and investigation: