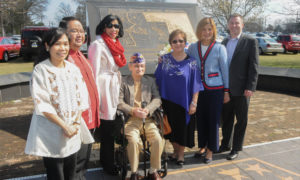 Freeholder Susan Shin Angulo joined the Philippine Consulate General of New York and members of Camden County’s Filipino community for a wreath-laying ceremony commemorating the 77th Anniversary of the Day of Valor on April 6th.

“Seventy-seven years ago, thousands of brave Filipino and American soldiers were forced to endure torture and cruelty in defense of democracy around the world,” Rodriguez said. “On this day we recognize their sacrifice, and celebrate the heroism of those soldiers who defended their country and its allies under unimaginable circumstances.”

The Day of Valor, also known in Filipino as Araw ng Kagitingan, is a national Filipino holiday which celebrates the soldiers who were forced to endure a treacherous, 87-mile journey to a prisoner-of-war camp in Carpas, Tarlac following the fall of Bataan in 1942 (also known as the Bataan Death March). Thousands of soldiers died of starvation, dehydration, and exhaustion during the march, however historians have recognized the soldiers’ efforts in battle as a key to resistance, allowing American forces time to defend other Pacific bases from Japanese attacks.