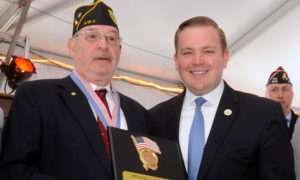 “Each year we gather to honor those who served and lost their lives at Pearl Harbor on the fateful day that threw the U.S. into World War II,” said Freeholder Bill Moen. “The Freeholder Board invites all county residents to the Battleship to reflect on the contributions of the men and women, past and present, who have faithfully served our nation.”

The award is named for Reverend Peter A. Molnar, known as “Padre” to the Veterans’ Community, who died on October 19, 2012 after decades of devotion to his fellow servicemembers. He served as an Army Chaplain in Vietnam and served active Reserve and National Guard units for 32 years, earning the rank of Colonel. He belonged to American Legion Post #94 and #371, Jewish War Veterans of the USA Post #2013 and VFW in Berlin. Father Molnar worked as a Mental Health Administrator for Camden County for 17 years, and also served as an Assistant Hospital Administrator and Social Worker for the Veterans Affairs Office until retiring from government. During that time, he served a total of 50 years in the Episcopal Diocese of New Jersey, where he was Vicar at St. Mary’s Church in Clementon and Church of the Atonement in Laurel Springs.