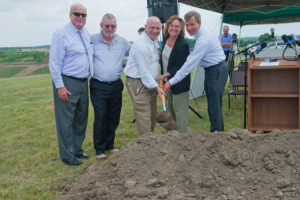 (Pennsauken, NJ) – The Pollution Control Financing Authority of Camden County (PCFACC) has partnered with Energy Power Partners to develop and build a 2,700 kilowatt solar project at their facility in Pennsauken Township.

“Solar panels have been providing energy at the PCFACC for about a decade. This new system will produce approximately 3,500,000 kWh per year, which can power up to 300 homes,” said Freeholder Jeffrey Nash, liaison to the PCFACC.

According to the EPA, the solar energy will reduce Green House Gas emissions by 2,700 tons. This is the environmental equivalent of:

“The landfill has the ability to generate both energy and income by using up the latest technologies both above and below ground,” Nash said. “The facility also harnesses methane before this harmful greenhouse gas escapes into the environment.”

Methane is a natural bi-product of organic matter decomposing deep inside airless pockets in landfills. Since 2006, the PCFACC has been captured this gas through a complex network of perforated pipes sunk into the waste and then moved by vacuum to large generators where produces approximately 1 megawatts of electrical power each year.