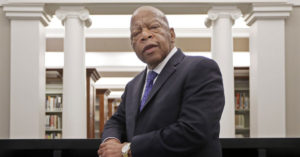 The statement below is by Freeholder Jonathan Young regarding the passing of John Lewis.

“This weekend we lost one of America’s greatest living heroes, a civil rights icon whose lifelong fight for fairness, equity, and justice brought our nation ever closer to achieving the ideals it was founded on. In recent weeks, John Lewis undoubtedly watched as a new generation, made up of people of all races, religions, and status, took to the streets to demand equal treatment for all. When John Lewis started his career, such a scene likely felt impossible, and it brings me great joy to think that he had the opportunity to witness his legacy in action before his passing. The movement for social justice and fairness that we find ourselves in today would not have been possible without the men and women like John Lewis who knew that a better future was possible, and spent their entire lives working to bring it to fruition.”