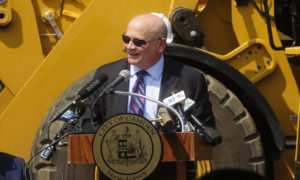 (Camden, NJ) – Freeholder Jeff Nash joined Camden Mayor Frank Moran, officials from the U.S. Environmental Protection Agency (EPA), the New Jersey Department of Environmental Protection (DEP) and the U.S. Department of Housing and Urban Development (HUD) to celebrate the start of the Camden Laboratories demolition. Spearheaded by the efforts of the Camden Collaborative Initiative (CCI) to combat illegal dumping citywide, the decrepit buildings that comprise Camden Labs will be demolished to make way for its eventual transformation to park space. The City of Camden and Camden Redevelopment Agency (CRA) received critical financial resources from the DEP and EPA for the project.

“The demolition and remediation of this neighborhood eyesore and environmental tragedy will not only benefit the residents of Camden City, it also sends a clear message that even some of the worst illegal urban dumping sites can be transformed into recreational open space,” Freeholder Nash said. “We are sending a clear message that we will not allow these types of environmental offenses to continue, and will work together to revitalize the city to improve the quality of life for the residents, protect the environment and promote economic development.”

Labeled New Jersey’s largest urban illegal dumping hotspot, Camden Labs is located adjacent to a park and school and negatively impacts the quality of life of the residents in the surrounding Whitman Park neighborhood.

“The demolition of Camden Labs represents environmental justice in action as we take a step towards a more sustainable future not only for all Camden residents but the entire State of New Jersey,” said Mayor Frank Moran.  “It’s been so inspiring to see what we can accomplish when we work together through strategic community partnerships and collaborations at all levels of government.”

The USEPA provided a $200,000 grant to the Camden Redevelopment Agency to work with community stakeholders to develop an area-wide plan and implementation strategy for the Mt. Ephraim Choice Neighborhood, which includes the Camden Labs site. Camden Labs was identified as a catalyst site for redevelopment in the area-wide plan. EPA has also provided over $500,000 in assessment and cleanup grants to specifically address the Camden Labs site, and a total of $8 million in brownfields assistance to neighborhoods across Camden.

“Camden’s industrial past has presented its communities with tough challenges—the city has two Superfund sites, illegal dumps and a combined sewer system that overflows with as little as 1 inch of rain—but the Camden Collaborative Initiative gives power back to the communities, making them a partner in forging a new future,” said EPA Regional Administrator Pete Lopez.  “EPA is working with our partners to leverage resources and implement community-driven solutions to improve the environment and the quality of life of Camden’s residents.”

With over one million dollars in total grant money awarded by the NJDEP Office of Brownfield Reuse for remediation and site investigation, the demolition is a culmination of NJDEP’s “Don’t Waste Our Open Space” program, an effort directed at eliminating illegal dumping statewide.

Illegal dumping—dumping waste at a remote location or an abandoned property instead of in a landfill—is an expensive problem for Camden.  The City expends roughly $4.5 million each year on the cleanup and disposal of illegal dumping debris.  Over 5,800 tons of debris, including trash, tires, and electronics, have been collected from illegal dumping sites just this year.

“We’ve seen tremendous job growth in Camden, along with major improvements in city schools, parks and public safety. Today is another huge milestone as we demolish Camden Labs and showcase our city’s commitment to overall environmental improvement,” said Congressman Donald Norcross. “Illegal dumping has long been an ugly, expensive problem here, but we are now on the path to a clean, sustainable future. Thank you to everyone involved in this project – it’s an honor to work with all of our dedicated partners who are working to make Camden a better place to live.”

CCI also established an online reporting tool, Camden Reports, where residents can anonymously report incidences of illegal dumping in their neighborhoods. At Camden Labs, CCI coordinated the effort to remove over 500 tons of solid waste and to secure the site to prevent future dumping.  “Illegal dumping is not just unsightly; it also poses a real threat to our public health and safety,” said Kris Kolluri, President and CEO of Cooper’s Ferry Partnership. “I’m proud of our collaborative efforts through CCI to engage communities in neighborhood change.”

After the completion of the demolition and environmental remediation of the site, the area will be transformed into an extension of the adjacent Whitman Park.  With support from Camden County, the City of Camden, and Cooper’s Ferry Partnership, via the HUD Choice Implementation grant, Camden Labs will be transformed from a nuisance to a safe haven.  Once completed, the new 10-acre Whitman Park will be a state-of-the-art recreational facility for football, baseball, basketball, and more.

The demolition of Camden Labs is a tangible illustration of the success of the partnerships established by the Camden Collaborative Initiative. “The elimination of a large illegal dumping site in close proximity to the Mt. Ephraim area, the recipient of $13.2 HUD Choice Neighborhood Implementation Grant, is only one example of what federal, state and local partnerships are all about,” said Lynne Patton, Regional Administrator for New York and New Jersey. “The invaluable input from CCI, as well as additional federal and state funding for an open space recreational area, will help move this community towards health and wellness for all Camden families, which is one of the primary goals of the Promise Zone.”

About CCILaunched in 2013, the CCI is a partnership between more than 70 governmental, non-profit, private, and community-based agencies to implement innovative strategies to improve the environment and the quality of life of Camden’s residents. Led by the City of Camden, New Jersey Department of Environmental Protection, United States Environmental Protection Agency, Cooper’s Ferry Partnership, Camden County Municipal Utilities Authority, and the United Way of Greater Philadelphia and Southern New Jersey, CCI is comprised of seven working groups that focus on air quality, environmental justice, brownfields, waste and recycling, health and wellness, stormwater management, and environmental education.

For more information on the 2018 Camden Environmental Summit or CCI, please visit www.camdencollaborative.com.