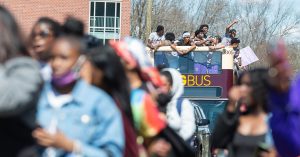 To celebrate the recent achievements of athletic teams from Camden High and Woodrow Wilson High, the Board of Commissioners joined Camden City Mayor Victor Carstarphen on Tuesday to hold a championship parade and community celebration.

“These young men and women are truly a force to be reckoned with on the basketball court and the football field,” Commissioner Al Dyer said. “They gave it their all this past season, which clearly paid off and they deserve to be celebrated for their performances. This is a wonderful opportunity for the Camden City community to come together and honor these athletes who have bright futures ahead of them.”