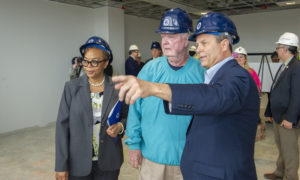 Chief Executive Officer, Dana Redd, previously talked about the newest addition to the Eds and Meds corridor in the city.

“We’re going to see some of the region’s best and brightest scientific minds flocking to the City of Camden when this project is completed,” Redd said. “The city will soon be synonymous with scientific and medical innovation. We expect this to make Camden one of the most sought-after research destinations in the state of New Jersey.”

Chairman of the Joint Board, Jack Collins spoke about the economic impact of the JHSC and what its completion will mean for the City of Camden.

“Education and medicine is the fastest growing job sector in New Jersey, and is among the top sectors nationwide. By 2020, estimates suggest that as many as 1 in 6 New Jersey jobs will be in eds and meds,” Collins said. “The JHSC represents the promise of economic sustainability in Camden long after this building is opened. Because of the unprecedented collaboration taking place here, Camden will see accelerated job growth, increased investment in businesses and start-ups, and an influx of professionals and students who will actively participate in the local economy.”

Standing in the lobby of the new building after the tour Congressman Donald Norcross talked about the unprecedented collaboration between the higher education institutions and the long-term vision for the corridor.

“We’re seeing the future of science, the future of medicine and the future of education in Camden,” Norcross said. “I am impressed with the work accomplished so far – and I know, when completed, this center will bring world-class research and jobs to our area. Thanks to the collaborations between our South Jersey institutions, Camden is both attracting and retaining great students and educators. I look forward to continuing to see the growth of our ‘Eds and Meds’ Corridor.”

The $70 million, four-story building will include research laboratory space for Rowan University and Rutgers University-Camden, a simulation rooms for medical students at Cooper Medical School of Rowan University, instructional space and simulation labs for Camden County College, office space for the Board of Governors, a first-floor café, a rooftop terrace, and general-use multipurpose spaces. Construction began in the fall of 2017, and the JHSC is expected to open later this fall.

“This is the first facility of its kind, where multiple universities and institutions share one facility, ever to be built in New Jersey,” Redd continued. “By bringing together partners from across higher education, and leveraging available resources, we were able to bring Camden a state-of-the-art facility that’s going to provide new jobs to the city, additional job training and educational opportunities, and significant economic growth to the Eds and Meds corridor and all of the city.”

The JHSC is based on the MESH Economy Model, which co-locates faculty and students from different academic disciplines in order to share facilities and equipment. By bringing these various institutions together, resources can be utilized with maximum efficiency to make this a definitive research footprint in South Jersey. Approximately two-thirds of the space will be dedicated to research, multi-purpose rooms and offices for biomedical research.

“We are setting an example for the rest of the country with respect to how institutions can collaborate efficiently and positively impact the economy of an entire region,” said Ali Houshmand, President of Rowan University. “We are supporting the number one driver of economic growth in the region, and investing in the long-term viability of Camden’s resurgence in South Jersey. Our message is that our universities plan to rise together with the City of Camden right alongside us.”

The construction of the 100,000 square-foot building will generate approximately $72 million in economic impact in the City of Camden alone and $122 million statewide by the time the project is completed. Even more importantly, the education and training that will take place in the Center will prepare generations of area residents for meaningful careers in health care and biomedical research.

Rutgers University-Camden Chancellor, Phoebe Haddon, spoke about the future of biosciences in the city.

“The research that Rutgers–Camden scientists will conduct in the Joint Health Sciences Center will be nothing short of transformational. Our innovation in the biosciences will chart new medical treatments, define scientific processes, and create applications that advance New Jersey’s health care providers and other businesses. Better still, the nature of this building will promote meaningful collaborations among researchers and educators from Rutgers, Rowan, and Camden County College.  The Joint Health Sciences Center places New Jersey at the forefront of maximizing public investment in research and Rutgers University–Camden is proud to play a leading role in this endeavor.”

Camden County College President Donald Borden also talked about the benefit for students and professionals who are located at the new site.

“These are the premiere public research universities in New Jersey coming together, putting our students’ side-by-side and providing them with the same resources,” Borden said. “This is going to create an environment you cannot find on any one campus. Our students will have greater access to their peers, research opportunities, and an incredibly far-reaching professional network. All of this access is going to help people build careers in Camden, and that’s going to push growth in the city to levels we haven’t seen in decades.”