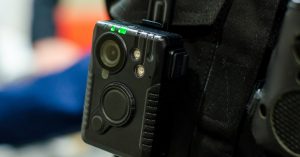 (Camden, NJ) – Officials from the State of New Jersey, Camden County, Camden City, and Camden County Police Department (CCPD) gathered today to mark the implementation of a policy requiring all uniformed police officers in the state to be outfitted with body worn cameras. The CCPD was the largest agency in the region to implement body worn cameras for every officer working in 2016.

The CCPD has been at the forefront of training and practicing an innovative form of de-escalation and has helped lead a national conversation regarding use of force in the 21st century and modern policing. County Commissioner Al Dyer talked about growing up in Camden the changes he’s seen firsthand since the inception of the department in 2013.

“Growing up in Camden and working in the city as an educator and coach I can tell you accountability and transparency are keys to reconnecting with our community,” Dyer said. “Since Metro was created the foundation of the department has been to bridge the gaps that existed between the cops and our community and I believe body worn cameras and solid guidelines have assisted in that process. We still have more work to do, but I want to take this opportunity to applaud the Governor and Lt. Governor for mandating this critical tool for police officers throughout New Jersey.”

CCPD Chief Gabe Rodriguez, the first Latino to serve as the department’s executive, highlighted how the implementation of body worn cameras became a training tool for officers.

“When we started working with the NYU Policing Project on our body worn camera implementation plan in 2015 we knew that the transparency of body worn cameras would be a strong asset for our work with the community,” Rodriguez said. “Since then, our BWC program has been an invaluable tool and over the last two years our agency has started to use the footage for training- much like a quarterback would review game tape in the film room. It has made us a smarter and stronger organization through the analysis and our ability to deconstruct incidents from this footage. In short, for 21st century policing, these cameras have become critical to our work and underscore our commitment and dedication to officer accountability.”

Since the creation of the Camden County Police Department, the City of Camden has seen a 44 percent drop in violent crime and the number of homicides in the city has reached a 35-year low. Congressman Donald Norcross noted the department’s growing role in the national conversation around policing and how it will continue to lead.

“Reimagining law enforcement is not an easy task, but through innovation, hard work and continuous review, Camden County Police Department officers have not only become a part of the fabric of our community, they have become a national model for community policing,” Norcross said. “I thank CCPD Chief Rodriguez for his commitment to our community and Governor Murphy for continuing the work we started in the NJ Senate and here in Camden by bringing body cameras to all uniformed NJ officers. Body cameras are truth tellers, protecting police and the public alike, and this is the logical next step in improving the quality and transparency of law enforcement.”

Governor Phil Murphy, Lt. Governor Sheila Oliver, Attorney General Grubir Grewal, and Colonel Patrick J. Callahan, Superintendent of the New Jersey State Police, joined officials in the City for the announcement and to spotlight the state’s pioneering efforts to modernize policing across the board.

“We are witnessing a new chapter in policing in New Jersey with the reforms we are implementing in partnership with law enforcement and community leaders. And, with the body cameras we are funding, we will literally have an objective witness to how police carry out their duties,” Governor Murphy said. “These powerful devices have been embraced by community members and advocates calling for transparency and by police officers, who see them as a critical tool to protect and assist law enforcement with their difficult jobs. On this important day, we’re also happy to announce funding for all 487 agencies that applied for body-worn camera grants.”

“This is a new day in policing for our state and our country and I want to thank Governor Murphy, Attorney General Grewal, and our legislators for proactively getting in front of the issue of implementing informed and effective policing practices,” Lt. Governor Oliver, who serves as Commissioner of the Department of Community Affairs, said. “Body cameras are about supporting police officers so they can do their job better. And we are immensely grateful for the job they do every day to keep us safe.”

“As we work to strengthen trust between our officers and the diverse communities they serve, the need for accountability and transparency in policing has never been greater,” Attorney General Grewal said.  “Body cameras are a powerful tool to help us in these efforts.  By acting as an unbiased witness to law enforcement actions, they help to safeguard equal justice, while also protecting the vast majority of officers who do the right thing day-in and day-out.”

“New Jersey State Troopers have been utilizing vehicle-mounted cameras for more than two decades and body-worn cameras for over several months with great success,” said Colonel Patrick J. Callahan, Superintendent of the New Jersey State Police. “Today’s announcement is welcome news for both New Jersey law enforcement and those we serve, because this important tool protects not only those we encounter, but the  thousands of sworn officers who serve New Jersey with the highest level of professionalism and compassion of any state in the country.”

Officials from throughout the city highlighted the impact of modern policing practices and policies that establish greater accountability for officers while strengthening the ability of departments to serve their communities.

“I commend Governor Phil Murphy, Lieutenant Governor Sheila Oliver, Attorney General Gurbir Grewal and NJ Sate Police Colonel Patrick Callahan for coming to Camden to mark this historic day for the State of New Jersey,” said Camden Mayor Victor Carstarphen. “Our City has realized a significant drop in violent crime and our neighborhoods are now the safest in decades.  The Camden County Police Department has been at the forefront as the largest agency in South Jersey to implement body-worn cameras back in 2016.  This technology has not only proven to be an effective public safety tool but helps to protect our police officers and our community.”

“At a time when we hear so much about difficulties the police departments and minority communities face in many parts of the nation, I am honored to represent a city and county that present a shining example of how police departments and communities should work together for the protection of all of our citizens,” said State Senator Nilsa Cruz-Perez.

“I am proud to be a part of a community that continues to be a leader in the fight for social justice,” said Pastor Steven Mack. “Last summer the world watched as the citizens of Camden along with the city’s police, political officials and community leaders joined in the protest against the murder of George Floyd. I look forward to supporting Governor Murphy, Chief Rodriguez and the Camden County Police as they now lead the statewide effort to implement effective community policing strategies.”