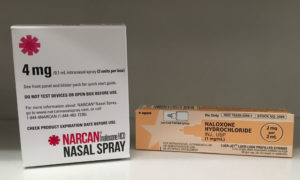 (Camden, NJ) – Camden County Police Department officers have now saved the lives of 350 overdose victims using Narcan since they first began deploying with the anti-opioid medication in May of 2014.

On Saturday, Aug. 18, just after 7:30 p.m., Officer Vincenzo Dolce responded to an abandoned property on the 700 block of Kaighn Avenue where officers had located a female overdose victim who was unresponsive. Officer Dolce quickly administered Narcan, and the woman eventually regained consciousness before being taken to Cooper University Hospital.

On Thursday, Aug. 16, just before midnight, Officers Kyle Bowman and Ryan Fink located a woman near the corner of Broadway and Walnut Street who had just begun to overdose and lost consciousness. Officer Fink administered Narcan and the woman quickly regained consciousness before being treated at the scene by medical personnel.

On Tuesday, Aug. 14, just before 8:30 p.m., Officer Dolce responded to the corner of Broadway and Kaighn Avenue where he located a female overdose victim who was lying on the ground unconscious. Officer Dolce administered Narcan and the victim became responsive and was treated by EMTs at the scene.

On Tuesday, Aug. 7 at 6:28 p.m., Officer Dennis Smarth was on patrol in the area of Broadway and Chestnut Street when he was alerted to a man inside a parked vehicle who was experiencing a heroin overdose. Officer Smarth saw that the man was unresponsive and struggling to breathe. He administered Narcan and the victim soon regained consciousness before being taken to Cooper University Hospital for treatment.

And on Sunday, Aug. 5, at 3:20 a.m., Officer Dolce responded to Yorkship Square where officers located a woman inside a taxi who was overdosing and was unconscious and struggling to breathe. Officer Dolce administered Narcan. The woman eventually regained consciousness while being taken to Cooper University Hospital.

To date in 2018, there have been a total of 317 recorded drug overdoses in the city, including 41 fatal overdoses. The Camden County Police Department and other agencies have issued public safety alerts about the danger to drug users purchasing narcotics in the city and has distributed informational cards throughout the city encouraging anyone who witnesses an overdose to immediately call 911 and report it. Anyone with information about the distribution, sale or use of drugs should call the department’s anonymous tip line at (856) 757-7042.

At an Oct. 7, 2015, ceremony honoring police officers who have used Narcan to save lives, Camden County Freeholder-Director Louis Cappelli Jr. announced the launch of Operation SAL, a pilot program to provide detoxification and addiction treatment/rehabilitation services to overdose victims in the county. For information about Operation SAL and other available treatment services for drug users and families, including crisis hotline numbers, visit the Camden County Addiction Awareness Task Force website at addictions.camdencounty.com. For addiction help call the CRISIS hotline at 877-266-8222 or call 911 in the event of an emergency.