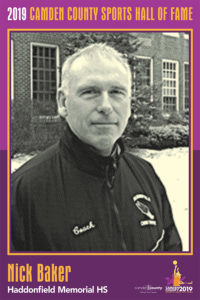 Nick Baker is now retired as track and field coach, but continues as the successful cross-country coach at Haddonfield High School. He and his wife Maureen are still part of the Haddonfield family they have served for more than 40 years. The feelings are mutual, as the Baker Project recently launched attests. The Baker Project is a drive to raise money to dedicate the Haddonfield track to honor

Nick and the stadium patio to honor both Nick and Maureen. The drive is being led by Dr. Joseph Serico, a former principal, under the endorsement of the Haddonfield Educational Trust. Dr. Serico has known the Bakers for over 40 years and even coached opposing teams. So if anyone knows how deserving the Bakers are, it is he.

“Last year I took on the volunteer responsibility to lead a campus-wide beautification project at Haddonfield High School,” he said. “We were offered the opportunity to secure naming rights as part of the project. In my view, there are only a very select group of people who have earned the right to be so honored by the school. Haddonfield won nine winter indoor track titles and five outdoor state championships in track under Nick Baker’s tutelage. He has compiled an even more amazing record in cross-country, which he still coaches. His teams have compiled a record of 326-16 and have a winning streak of 200 dual meets going into this year. He has won 35 state championships, including the last 15 in a row.

Baker has been the South Jersey Track Coaches Association Coach of the Year four times for cross- country and twice for track, in addition to Northeast Regional Coach of the Year. He was inducted into the SJTCA. At the induction, Baker was hailed as “the most successful track and cross-country coach in South Jersey history.” He has also served as president of the SJTCA for 14 years. Maureen Baker started the girls’ track program at Haddonfield in 1978 and accomplished something her husband hadn’t. Whereas Nick took over established programs, Maureen launched the girls’ program from scratch. Like her husband, girls’ track and cross-country has produced plenty of winners – 150 consecutive dual meets and nine state championships in cross-country. She has retired as coach, taking on a role of teaching younger athletes in the Haddonfield Middle School.

Nick is a native of Ireland who came to New York at the age of five with his parents. He was a member of a state champion and Eastern States cross-country team and is a graduate of Springfield College, where he met his wife. The Bakers have two children, Courtney and Colin. Courtney is a teacher in South Jersey and follows in her parents’ footsteps as the Haddonfield head girls’ track and cross- country coach. Colin, the school’s 1600 record-holder, now works in finance. Dave Stewart, assistant cross-country coach and the father of one of Baker’s former distance runners, is another Nick Baker booster. He states that every Haddonfield student-athlete, whether a freshman or senior, continually believes in the Baker system and the championship results serve as proof.

“Nick would be the first to acknowledge that the main part of his success is from the kids buying into the program for over 40 years and doing the work needed,” Stewart said. “If I could describe better how he gets them to do that, and somehow package it, I could make a lot of money. But he just somehow has that gift of leadership where the kids take charge and internalize the team’s goals.”