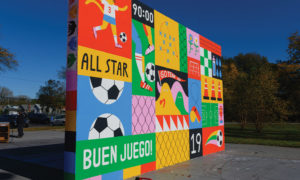 (Camden, NJ) – Freeholder Carmen Rodriguez joined Camden City Councilwoman Felecia Reyes-Morton today for the official opening of a brand-new soccer “mini-pitch” at Von Nieda Park. This mini-pitch is the latest development in Target’s and the U.S. Soccer Foundation’s joint efforts to create 100 mini-pitches by the end of 2020.

The mini-pitch replaces an old and seldom-used tennis court at the corner of Pierce Avenue and North 30th Street and represents another significant addition to the amenities offered in Camden City’s parks.

“Like any team sport, soccer teaches our children about leadership, perseverance, and teamwork, but that can only happen if our kids have a safe place where they can learn and play,” Rodriguez said. “Thanks to the generous support of our partners, children in Cramer Hill now have a state-of-the-art soccer pitch within walking distance of their homes.”

Now open, the mini-pitch will be used by the local YMCA and other community organizations for recreational youth soccer games and leagues.

“The Y’s Soccer for Success programs in Camden City began in 2012 with 45 players,” said Jen Segelken, Vice President of Community Services for the Greater Philadelphia YMCA. “Today, we proudly serve over 1000 players and we cannot wait to implement the program at the new pitches. The Greater Philadelphia YMCA is thrilled to be a part of another project that provides families with another safe place to play and enjoy healthy activities in Camden.”

The U.S. Soccer Foundation, through its It’s Everyone’s Game movement, aims to create 1,000 safe play spaces across the United States and reach one million participants in Soccer for Success programming by 2026. The mini-pitch also serves to introduce the game of soccer in areas where participation is traditionally low. Approximately one-third of kids who use U.S. Soccer Foundation mini-pitches are new to the game.

“Our work at the U.S. Soccer Foundation is centered around increasing access to the beautiful game,” said U.S. Soccer Foundation President & CEO Ed Foster-Simeon. “But it is not without the steadfast commitment of partners like Target that we can turn our dreams into reality. We are beyond proud of our accomplishments thus far, which include this beautiful pitch and mural at Von Nieda Park.”

Two additional pitches are coming to Camden’s Northgate II Park through the Target and U.S. Soccer Foundation partnership. Other pitches have been created across the country in places such as Philadelphia, Baltimore, and Chicago.

During the opening, officials also unveiled a new mural installation associated with the new park feature created by local artist, Lauren West. West is an illustrator, muralist and designer based in North Philadelphia.

The U.S. Soccer Foundation’s programs are the national model for sports-based youth development in underserved communities. Since its founding in 1994, the Foundation has established programs proven to help children embrace an active and healthy lifestyle while nurturing their personal growth beyond sports. Its cost-effective, high-impact initiatives offer safe environments where kids and communities thrive. Headquartered in Washington, D.C., the U.S. Soccer Foundation is a 501(c)(3) organization. For more information visit www.ussoccerfoundation.org or follow us on Twitter and Facebook.