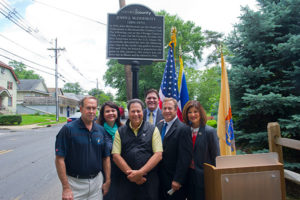 (Cherry Hill, NJ) – The Freeholder Board honored John McDermott, the first American to with the U.S. Open, and the first head professional at Merchantville Country Club. A new sign in commemoration of McDermott’s achievements and contributions was unveiled on Chapel Ave. in front of the club. This is the start of a project that will recognize the contributions of Camden County residents with ornamental markers to build public awareness about the region’s rich history.

Freeholder Director Louis Cappelli, Jr. who attended the ceremony, is excited to see the county recognizing one of its greatest champions. He also wants to shine a historical spotlight on some of the little-known key figures of Camden County.

“It is never too late to honor the achievements of an incredible athlete and American icon in the sport of golf,” Cappelli said. “His contributions to the game and to Merchantville Country Club are a source of great civic pride for this community and the county.”

In 1911, McDermott became the first American to win the U.S. Open. He won the tournament again in 1912, making him one of just five players to ever win the Open in back-to-back years. McDermott is still the youngest player to ever win the U.S. Open, having been just 19 years old when he was crowned champion. In total, McDermott competed in six U.S. Open Tournaments and placed within the Top-10 finishers in five of them. He retired from professional golf at 23 years old after his ship collided with another during a return voyage from Britain and left him disabled.

“Whether you’re a fan of the sport, an occasional tee-timer, or just a devoted member of our county, we want you to recognize that one of golf’s greatest players got started right in your backyard,” Cappelli said. “This dedication serves as a reminder to all that big things really can come from small places. Maybe it will even have them picking up a club and hitting the links.”