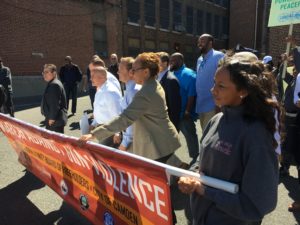 (Camden, NJ) – Gun violence has been a scourge on Camden City undermining public safety and creating a public health crisis throughout all 21 neighborhoods. The contraction of firearm laws and the explosion of gun sales to 300 million a year has created a nation where these weapons are a key tool in all crimes from robbery to homicide. Furthermore, the propensity and ubiquity of guns used in the city and throughout Camden County has had devastating effects on our community touching every facet of life and compromising the public welfare of our residents.

“With nationwide deaths of more than 30,000 people last year at the hands of guns and a record number of mass shootings in 2016 we have a moral imperative to stand up and do something about this insanity,” said Freeholder Director Louis Cappelli. “There is no secret that Camden has had and continues to suffer at the hands of this ongoing crisis. Guns continue to be the contributing factor to most countywide homicides and severe trauma suffered throughout our county. This is the time for us to work together to break the cycle and stop the violence.” 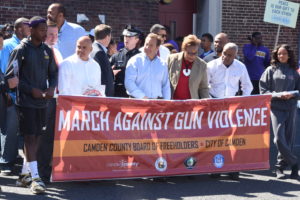 Eliminating gun violence is an issue that the public overwhelmingly supports by bringing common sense legislation to the forefront like universal background checks, keeping guns out of the hands of individuals with behavioral health issues and keeping guns away from people on the terrorist watch list, to cite a few. These initiatives combined with economic opportunity, stronger re-entry programs for inmates, quality educational opportunities and mentoring programs for children are some key topics that are addressed by march participants.

“Our nation is at a cross-road, everyday some of us witness, read about or live through the tragic acts of gun violence. This direct threat to our neighborhoods knows no boundaries and has affected every square mile of our county,” Cappelli said. “Standing together with the community I can tell you these heinous acts and sometimes tragic mistakes undermine our collective peace of mind and our most sacred places.”

Cappelli went on to say that each time get he receives notification of a shooting or murder in the county it breaks his heart for the family.

“All victims of gun violence are a child, brother, sister, or parent to someone. Furthermore, almost every time we recover the firearm from the scene the serial number has been scratched off and it was sold illegally,” he said. “Many times, it is the same illegal gun used in multiple crimes, which can be tracked through ballistic testing.”

Last year, our nation logged a record number of mass shootings, more than one a day and since the Sandy Hook massacre in 2012, more than 220 shootings have taken place on school campuses. These statistics are sobering and disconcerting for our future and the ability for someone to put their hands on a weapon.

“We need to show our intestinal fortitude by eliminating gun violence, by working with Congressman Norcross to strengthen federal gun laws and eliminate loop holes that put illegal firearms from the iron corridor of other states right here in our own backyard,” Cappelli said.  “Even more important, as a community we need to tell our neighbors to put the guns down and that solving a dispute with a firearm will destroy lives.”

“Today, we marched through Whitman Park because we have a moral obligation to our families and children to do better,” Cappelli said. “Each one of us can make a difference and get guns out of Camden County, whether it is by mentoring a child or providing a job to someone who just got out of jail.”

Cappelli called for change and to proactively engage our neighbors because the number one thing that stops a bullet and gets rid of guns is a job.

“Today, we stand together to show our resolve as a community that gun violence must stop and that the killing and mayhem needs to end,” Cappelli said. “In short, we need to follow the Hippocratic ethos: Minimize harm and preserve the sanctity of life. Stopping gun violence will be a significant step forward in living up to that very important goal for our county.”

“Many of my colleagues in Congress have chosen to listen to the NRA instead of the American people, so I stand with Camden and ask: Do we represent the NRA or USA? There are simple, common-sense things we can do right now to help save American lives: We can ban assault rifles, stop suspected terrorists from buying weapons, strengthen background checks, close loopholes, allow for proper gun violence research and end gun trafficking. Let’s stop waiting and take action now,” said U.S. Rep. Donald Norcross.

no images were found