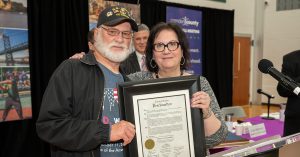 The Board of Commissioners met in Gibbsboro Monday evening for the next in a series of town hall meetings across Camden County. “These meetings are a wonderful opportunity to voice your concerns directly to your elected officials. Additionally, you will be able to access information on the variety of programs and resources that Camden County has to offer.” said Commissioner Melinda Kane.

During the town hall meeting, U.S. Army Veteran John Wayne Foxhill will be honored for his service to our nation.

Foxhill, a Gibbsboro resident of more than 50 years, served in the Army in the 1960s where he was stationed in South Korea. While abroad, Foxhill was a part of the 44th Engineer Battalion and helped to rebuild bridges that were previously destroyed during the war. He departed South Korea to his last duty station in White Sands Missile Range in New Mexico and was honorably discharged in July of 1968.

He has been a member of the American Legion Post 371 in Gibbsboro for 25 years and is a regular at local veteran’s events.

Foxhill was a principal in F&C Tree Service until he retired and sold his interest in the business. While he owned the business, he donated his equipment and time to place holiday lights on the town’s 50-foot tall Christmas Tree in the center of town.

Foxhill is very well known in Gibbsboro, especially on the local nature trails where he heads the Blueberry Hill Cleanup Patrol.