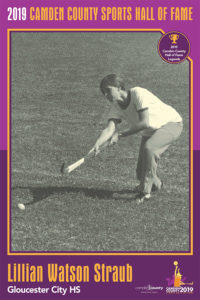 Starting at Gloucester City High School, Lillian Watson Straub played field hockey for 43 years. She worked on many committees for field hockey including the committee to divide New Atlantic into two divisions, which led to the creation of the Mid Atlantic Section. She was also instrumental in having women’s hockey added as an Olympic Sport.