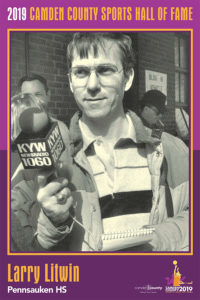 Larry Litwin has had an active and distinguished career in sports journalism, officiating, sports and professional organizations since moving to Camden County at the ripe old age of one week. His roots go back to the 1960s, when he was a three-year varsity third baseman at the newly-opened Pennsauken High School. He also served concurrently as sports editor of the school newspaper and yearbook, giving promise of what was to come over the next five decades.

He was also a standout in independent baseball, receiving MVP honors while playing for the Merchantville Lions club in the Delaware Valley League and batting .429 (believed to lead the league in hitting) for Westmont in the Garden State League. Litwin earned a partial baseball scholarship to attend Parsons (Iowa) College. There he also continued to hone his sports writing talents as sports editor and columnist for the college newspaper.

At Parsons, he also began his broadcast career as a play-by-play and color analyst for baseball and basketball for radio station KMCD-AM. Returning home, Larry began working for WJJZ (Mt. Holly) and WKDN (Camden). He covered scholastic football and basketball and was introduced to a larger audience when he broadcast the NIT Basketball Tournament, more popular at the time than the NCAA Tourney. That opened the doors to producing or announcing the newly-minted Philadelphia 76ers, the Philadelphia Golf Classic and many road games for the New York Mets. The late 1960s found Larry breaking into the Big Apple and reporting on all major sports and serving as producer for Howard Cosell’s popular daily radio program, “Speaking of Sports.” He also worked behind the scenes on ABC’s first “Monday Night Football” telecast.

Litwin also literally kept close to baseball by umpiring scholastic and college games. He is marking his 42nd year and has officiated nearly 2,000 games. That includes post-season baseball and softball games such as the Tournament of Champions and North-South All-Star Game. For the past 25 years he has worked closely with Joe Hartmann as an umpire, manager and championship announcer for the Diamond Baseball Classic. Larry was invited to join the Philadelphia Sports Writers Association in 1967 and has been a member of the Board of Governors and its secretary for more than five decades. He has also been the organization’s treasurer for the past seven years, succeeding the late Bob Kenney – founding president of this Hall of Fame, as well – upon his death. He has also served as emcee of the Sports Writers Association since the passing of Harry Kalas in 2009.

In 2007, he was inducted into the Public Relations Society of America College of Fellows for “having left a significant footprint in the field.” In Litwin’s busy life, he was elected vice-president of the
South Jersey Hot Stovers, an organization promoting baseball, in 2016. He has further contributed to, participated in or been recognized by the following organizations: Alpha Epsilon Rho National Broadcasting Society, Associated Press, Camden Police Department, College and University Public Relations Association, International Radio Festival of New York, Parsons College Wall of Fame, Philadelphia Press Association, National Radio and Television News Directors Association, Rowan University Faculty Wall of Fame, South Jersey Baseball Hall of Fame, Television and Radio Advertising Club of Philadelphia, United Press International.