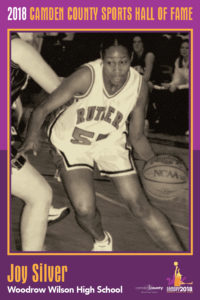 Joy Silver was a standout basketball player from an early age playing on the perennial AAU favorite Philadelphia Belles. Starting at age 10, Joy played for the Belles until high school. She was a standout athlete at Woodrow Wilson High School in Camden from 1994-1998. Ms. Silver participated on the Lady Tigers Basketball, Track and Field, and Volleyball teams. Joy played for Coach Tony Coleman at Woodrow Wilson. During her high school career, she scored over 1,000 points and over 1,000 rebounds. Joy lead the team to High School Group III Championships in 1996 and 1997. She received numerous accolades throughout her high school career including All American, All South Jersey, and many other awards.

Joy first attended college at Eastern Maryland Shore where she was redshirted her Freshman year. Life took a sudden change for Joy as she became pregnant. Despite being eight months pregnant, Joy was invited to play basketball for Coach Jackie Trakimas at Rutgers-Camden. Joy welcomed her son Isaac in September of her first year at Rutgers and began playing in October. Joy found a way to balance academics, athletics and motherhood. Despite the challenges, she was a dominant Lady Raptor. On the basketball court Joy had a stellar record, scoring 1,643 points and amassing 1,067 rebounds. She is the third highest scorer in Lady Raptor history and sits on top of the career leader list for rebounds. She also has the third most blocks of all Lady Raptors. Joy received many honors while in college including the Kodak Division III All-American, Women’s Division III All- American, D3Hoops All American, NJAC Rookie of the Year, NJAC Player of the Year, 1st Team all NJAC, NJAC Champions, ECAC Division III Metro Player of the Year, 1st Team ECAC Metro, Craig Keeler Memorial Tournament MVP and multiple NJAC Player of the Week and Raptor of the Week honors.

Joy tried out for Coach Joe Gillespie’s volleyball team despite having only played the sport one year in high school. Coach Joe welcomed her to the team and taught Joy how the game is played. Joy was a dominant player on the Volleyball Court too. Her name can be found among the best Lady Raptors in multiple categories including kills, blocks and total attacks. She still has the second most blocks in Lady Raptor volleyball history. She was twice named to the NJAC 2nd team. The Lady Raptors also recognized her as the Team Most Valuable Player in both the 2002-2003 and 2003-2004 seasons.

Isaac was on the sideline watching many games and he also joined Joy in the classroom too. Joy appreciated the support of many professors who helped her along the way to graduation. Today, Joy shares her experiences as a scholar-athlete and young mother with hundreds of students in the Camden School district serving as a College/Career Coach for Center for Families Services. Isaac is a freshman in college today.