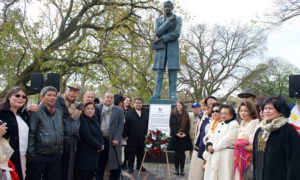 (Camden, NJ) – In recognition of what would have been Jose P. Rizal’s 158th birthday, the Camden County Parks Department is improving the site of Rizal’s monument in Cooper River Park. The 10-foot tall bronze statue was originally donated by the Philippine government in 1998, and the Government re-invested in the monument last year to have it refurbished.

“The improvements will replace some tiling on the floor of the monument while preserving the intended image of a Philippine and American flag – symbolizing the countries’ longstanding position as allies,” said Freeholder Jeff Nash, liaison to the Camden County Parks Department. “The statue and the entire Rizal Memorial Park is a recognition of the robust and active Filipino-American community in Camden County and its culture.”

In 2018, The Philippine Government through the National Historical Commission of the Philippines, re-invested in the monument and brought the original artist to the United States for several weeks to make landscape and hardscape renovations. The statue’s refurbishment was completed late last year, and at that time Camden County committed to restoring the flooring and tilework of the monument.

On Wednesday, June 19, local groups including the Knights of Rizal, held a wreath laying at the monument to commemorate Rizal’s 158th birthday and to celebrate his legacy in Filipino culture.

Rizal Memorial Park is located in Memorial Grove, a section of Cooper River Park containing several other significant monuments to members of the Camden County community. The statue depicts Dr. Jose P. Rizal, a key figure in the Philippines Propaganda Movement during the late 19th Century. Rizal, an ophthalmologist by trade, was a writer and key member of the movement which advocated for political reforms when the country was a colony under Spanish rule. Rizal was executed by the Spanish government at the age of 35 after his writings inspired the Philippine Revolution.