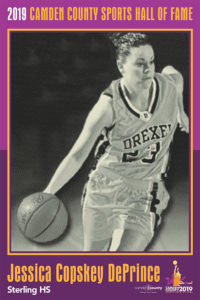 If it is true, that we do what we do because of who we are, Jessica (Copskey) DePrince showed she was a fighter from the start. In 1983, Jessica survived a serious child-hood illness at birth known as hydrops fetalis, the Doctors at Pennsylvania Hospital had given her less than a 3% chance for survival while still in the womb. After an emergency c-section, seven blood transfusions, and countless weeks in the NICU she had won her first battle long before ever stepping onto a basketball court.

In 1999 Jessica came onto the South Jersey high school basketball scene in parallel fashion to how she played, quiet and unassuming, showing little emotion on the basketball court, allowing her individual and team achievements to do the talking. Over the next four years under the leadership of legendary Sterling High School basketball coach Bill Ulrich and interim coach Jackie Donovan, Jessica and her team would make history. In 2000 and 2001 Jessica led Sterling to two New Jersey Group II State Championships, and to becoming the first South Jersey basketball team to win the Tournament of Champions in 2001. USA Today took note and ranked the Sterling Lady Knights 17th in the country.

Throughout all the big games there was one that stood out, even over the Tournament of Champions 2001 Title win against Columbia. That Tournament of Champions Title was really won a week before where spectators would bear witness to the same fighter that Doctors gave a 3% chance of survival to in 1983, and what many call the best basketball game of Jessica’s career. Sterling was down 32-25 early in the third quarter against powerhouse and consensus #1 team in the state Red Bank Catholic, with the game and her high school career slipping away Jessica managed to shake off defenders and hit two back to back three pointers sandwiched by a Red Bank Catholic foul shot, Sterling trailed by

1 point 33-32. With the game on the line Jessica was at her best, she shot 11-21 from the field and added seven rebounds for a game high 35 points, sealing the victory she went 10-10 from the foul line late in the game. Red Bank Catholic’s coach Joe Montano commented after the game, “she was a woman playing against girls tonight.”

Never comfortable with individual accolades Jessica exemplified true leadership holding great admiration and credited her coaches and teammates who fought alongside her in times of victory and defeat. The 6’1” guard compiled 2,991 points in her high school career and was named the New Jersey State Player of the Year in 2000 and 2001, Tournament of Champions MVP in 2001, and later to the New Jersey All Decade Team. She went on to earn a full-scholarship and start as a Freshman for Drexel University in the CAA Division I Conference, after being named to the CAA All-Rookie team in 2002 her promising career was cut short due to an injury going into her Sophomore season.

These days you will likely find Jessica in a hospital operating room serving as Director of Sales for State of the Art Medical, a leading medical device distributorship founded by Keith and Dena Lambie serving the Northeast for the past 30 years. The arena may look different; however, Jessica still strives to emulate the echoes that still ring true from Sterling’s Bill Ulrich and his uncanny ability to lead and coach up.

Now on the sidelines, Jessica has found great joy in coaching and watching her 11-year-old daughter Gracie develop and grow as an athlete and person. The opportunity to be Gracie’s Mom has far outweighed any accolade, and it has reinforced the message delivered from that little girl in the NICU, that who we are is what matters, if we understand this whether through victory or defeat, we will know success.