In Response to Yesterday’s Mass Shooting in Boulder, Colorado 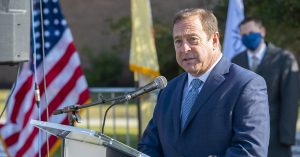 “In one week, we’ve seen two mass shooting events in the United States, the only industrialized country in the world where these attacks regularly occur. While little is currently known about the ten victims at this time, our hearts are with them and their families.

We do know that a Boulder police officer, by the name of Eric Talley, husband, and father of seven children, was one of the first units on scene and made the ultimate sacrifice defending his community, trying to stop a man on a murderous rampage. He heroically ran towards danger so that everyone else could run the other way and paid a cost that no family should ever have to suffer.

We mourn for the severe loss of life and the police officer who tried to stem the tide of death and destruction by the 21-year-old assailant who clearly had no business owning an AR-15 rifle or any other firearm. These tragedies have continued to haunt and mar the landscape of this great nation and it needs to end.

Our country is overdue for a moment of serious self-reflection, as we search for answers as to why Americans continue to carry out these attacks on their own communities, and why they are able to obtain the military-grade weapons to do it. The answer to the latter is clear, as one national political party stonewalls even the most common-sense, majority-backed gun control reforms that would keep guns out of the hands of dangerous individuals. Finding an answer to the former, however, is harder and much more painful.

Getting back to normal after the pandemic cannot mean getting back to these traumatic events with regular occurrence. Something must be done to address the public health epidemic of gun violence and mass shootings in this country, and it needs to start now.”