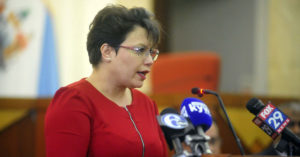 The statement below is by Freeholder Carmen Rodriguez regarding the Census Bureau’s decision to stop data collection on Sept. 30.

“Earlier this week, the Census Bureau confirmed its intention to end data collection on Sept. 30, a move that will stop census taking efforts a full month sooner than previously planned. This baffling decision will inevitably lead to an undercount of communities like Camden City where many residents are considered ‘hard-to-count.’

The pandemic has already dramatically affected our ability to ensure that everyone gets counted by making it unsafe to hold in-person events where residents can receive information or complete their census on site. Prior to the spread of coronavirus, we also had to spend months combatting fear caused by suggestions that a citizenship question would appear on the form. With this already being a historically difficult count, the Bureau’s decision to end collection early all but ensures that we will not be able to achieve an accurate enumeration.

The Census decides our share of annually awarded federal funds, our representation in Congress, and how businesses, schools, and hospitals allocate their resources. This is a critical process and, despite this confounding decision by the Bureau, we need everyone to be counted. If you have not already completed your census form, there is still time to do so online, by phone, or by mail.”