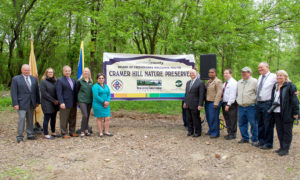 After more than a year of cleanup and remediation, the Camden County Freeholder Board and the Camden County Municipal Utilities Authority (CCMUA) are opening the Cramer Hill Nature Preserve to the public. This 35-acre urban forest on the border of Camden and Pennsauken will become the latest in a string of green spaces to open for the residents of Camden City and Camden County to enjoy.

“Decades of research has shown that the more open space available to a community, the better that place is to live and work,” said Freeholder Jeff Nash, liaison to the Camden County Parks Department. “There is a lush green space in the middle of this urban neighborhood, but the community hasn’t been able to access it for nearly 30 years. This is about restoring the public’s right to enjoy the land where they live, and protecting that land from criminal dumpers and other illegal activity.”

The Nature Preserve offers direct access to the Delaware River along a largely untouched stretch of natural shoreline. The dense forest surrounding the shoreline offers more undisturbed green space than any other location in Camden City or Pennsauken Township. The surrounding area features a stunning mix of wildlife and plants in the middle of an urban neighborhood in one of the state’s most populous cities.

The previously overgrown site across from Petty’s Island was formerly home to a sewage treatment plant operated by CCMUA for more than 40 years. The plant was opened in 1948 and operated until it was closed in 1990. The site has been off-limits since the plant closed but was targeted by illegal dumping and littering for more than 15 years.

“Since 2017, crews have been working to remove waste from the site and prepare it for visitors,” said Andy Kricun, Director of the CCMUA. “The forest was largely impenetrable for the last two decades because of thick brush lining the perimeter. Multiple access points have now been cleared and pedestrians will be able to enter the preserve with ease.”

Across from the preserve is Petty’s Island, the 500-acre site where the state of New Jersey is planning its own effort to preserve the land and expand educational opportunities among its diverse plant and wildlife. Once completed, the two sites will provide unprecedented access to natural resources, plants, and animals in one of the state’s most densely populated urban zones.

“The City of Camden and municipalities throughout Camden County now have access to an area of ecological diversity with little interruption from modern development,” Nash said. “The educational and recreational opportunities that this brings to families in lower-income areas of the city are unmatched by any other resources currently available.”

The Cramer Hill Nature Preserve will continue to be owned and operated by the CCMUA. The Camden County Freeholder Board and the CCMUA have been committed to expanding the city’s, and the county’s green and park space and have opened several other outdoor spaces in recent months. Most recently, officials opened the long-vacated Gateway Park located on Admiral Wilson Boulevard along Cooper River in March.