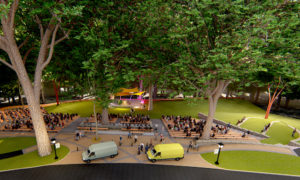 (Haddon Heights, NJ) – The Camden County Freeholder Board will begin a $2.1 million project to upgrade the 83-year-old amphitheater at the Haddon Lake Norcross-McLaughlin Memorial Dell. The venue, home of the county’s Sundown Music Series and other special events, will undergo a total renovation this fall modernizing the stage and seating area.

“The amphitheater will be under construction starting today and be completed early spring of 2019 to be event ready for Camden County’s 175th anniversary and the 2019 concert season,” said Freeholder Jeff Nash, liaison to the Camden County Parks Department. “This has always been an incredible venue, but we’re really excited to show the community what we have planned and to make it even better than it was before.”

The Camden County Parks Department will dismantle the current stage in order to create a new stage centered in the space. The plan also calls for updating the bench seating, adding safety lighting, increasing ADA accessibility, and improving the overall flow of seating. New lighting and paved areas leading up to the venue will be added, and the restrooms will be moved to an area near the parking lot.

“The whole intention behind this project is to make these upgrades, to improve the Dell, but to do so in a way that maintains the same feeling of this historic venue,” Nash said. “For example, we will reuse the stones from the original stage to create new signage, and the old Works Progress Administration-era wall will remain intact at the Dell.”

The park was originally created as a Works Progress Administration project begun in 1935. The amphitheater was completed the following year, and has played host to countless concerts and shows ever since.

“First and foremost, the Norcross-McLaughlin Memorial Dell is a tremendous asset to the park system and plays a critical role as a third place for members of our community to meet and engage each other,” Nash said. “This complex, in the middle of Haddon Lake Park, has been serving county residents for more than 75-years and we want to ensure that it remains a vibrant piece of the park system for the next 75 years.”

The Haddon Lake Norcross-McLaughlin Memorial Dell is part of the Camden County Park System and is located at 13th Avenue and Park Drive off of Prospect Ridge Boulevard in Haddon Heights.

The investment into the park system will also benefit the local borough as well providing a new asset and another destination to support the local economy during concert season.

“The improvements will beautify the Dell, and make it an even more desirable gathering place for Haddon Heights and Camden County residents,” Councilwoman Asiyah Kurtz said. “We want to thank the county for investing into our community and taking on this capital project for the benefit of our town.”

The Camden County Park System encompasses over 4,000 acres of passive and active recreational options at 21 sites throughout the county. In the parks you will find boat launches, bike trails, walking paths and playgrounds in every corner of the county. In addition, parks like Cooper River have been recognized statewide as a Great Place in New Jersey by the American Planning Association.