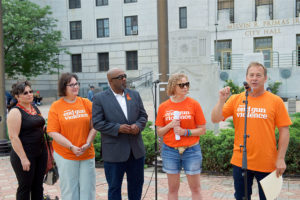 (Camden, NJ) – Freeholder Director Louis Cappelli, Jr. and Freeholder Carmen Rodriguez joined other Camden County officials on Saturday as they marched and rallied in recognition of the 5th Annual National Gun Violence Awareness Day. The event was hosted by the Camden County Freeholder Board in coordination with partners such as Moms Demand Action and the Center for Family Services.

“Every day that we don’t dramatically alter the way we think about firearm possession and sales, we lose hundreds of innocent lives to gun violence. Even in New Jersey, between 6,000 and 10,000 guns are bought and sold every month,” Cappelli said. “More people died from gun violence in 2017 than in any other year since 1968. It’s time for something to change and we have to lead the charge.”

Officials and supporters gathered at 10 a.m. outside of City Hall in Camden where advocates spoke about the importance of ending gun violence and increasing public awareness about the dangers of firearms in America.

Freeholders Cappelli and Rodriquez were joined by several prominent gun safety advocates and individuals affected by gun violence. They included:

Following these remarks and a performance by the Royal Brass Band, the crowd then joined officials in a scheduled march from City Hall down Market Street.

“We will continue to raise our voices until we are heard. The status quo in America is not working for the people and families affected by the scourge of gun violence,” Cappelli said. “The first and most important step is to raise awareness about the widespread and devastating effects of gun violence on individual lives. Then we can start a genuine conversation on how to address the problem.”