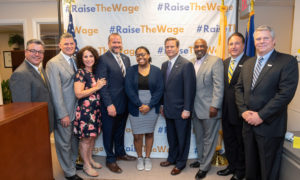 “Today, working people of this state are one step closer to a fair minimum wage and an equitable economy that offers opportunity to all who seek it,” Young said. “These increases will help lift thousands of families out of poverty, many of whom reside right here in Camden County. It is time that we put our working families first.”

The $1.15 increase is the largest single increase in the state’s minimum wage in at least 40 years.  For families across the state, especially in economically-challenged communities like the City of Camden, the increase will serve as an immediate economic stimulus.

During the event, Rep. Norcross also spoke about his support of HR 582 (Raise the Wage Act of 2019), a bill introduced in Congress which would raise the federal minimum wage to $15 an hour.