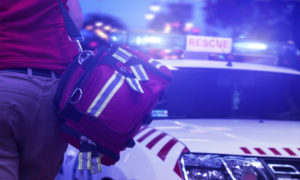 “More than a decade ago, a pragmatic plan was put into place that created a fund to support 9-1-1 services in the state through a 90-cent surcharge on individual wireless bills and VOIP users creating a proactive revenue stream to provide upgrades in an ever-evolving technology,” said Freeholder Jonathan Young, liaison to the Camden County Department of Public Safety. “Conceivably, the majority of the surcharge collected by the wireless carriers should be funneled back to our respective county communication centers or PSAPs for improvement and enhancement. However, the state has not provided Camden County with an allocation of funding from the 9-1-1 System and Emergency Response Trust Fund to maintain its overall operation since 2008.”

Each year, New Jersey collects approximately $120 million in telecommunication surcharges from consumers for the 9-1-1 System and Emergency Trust Fund Account. Since 2006, the State has collected more than $1.3 billion in fees, however only 11% of these funds have been spent on capital expenditures and upgrades to an ever-changing system. Moreover, the State has failed to provide any funding for upgrades to local 9-1-1 centers operated by counites and municipalities, and has instead diverted fund dollars to cover general operating expenses to other state needs.

“In Camden County, more than 75 percent of our homicides are solved based on video and digital evidence, and we know the first 24-hours of an investigation is critical to solving a case. We need to be another portal for evidence and intelligence for our law enforcement community and all of our first responders,” Young said. “This is a big reason that any funds from the state will make an extraordinary difference in our operation. People have pictures and video that can help us at the scene of an incident to ensure first responders can make the right split-second decision. They have intelligence that should be sent directly into our PSAPs but we can’t process it without next generation upgrades.”

Young called on state legislators to properly fund PSAPs as the state intended without taxpayers paying twice for a service funded by one entity.

“My hope is that in the future we can reconcile the issue of where these funds are going and get back to the foundational purposes of why the 9-1-1 System and Emergency Response Trust Fund was created in the first place,” Young said. “In short, wireless customers and taxpayers are being charged twice for 911 services with the surcharge and then again in their county tax bills.”