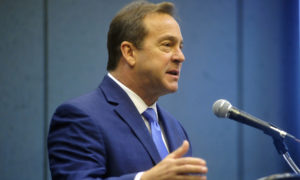 (Camden, NJ) – Freeholder Director Louis Cappelli Jr. is refuting a story which appeared in the Philadelphia Inquirer today, Sept. 12, citing a leaked memo from the New JerseyEconomic Development Agency (EDA) which inaccurately portrays the job gains made by Camden residents in response to the Economic Opportunity Act of 2013. The selective data set referenced in the memo omits key labor groups from its count, including unions and certain trades, artificially lowering the total number of jobs gained by Camden residents on Grow NJ construction sites.

“The leaked EDA report claims that just 27 construction jobs have gone to City residents, but having spoken to Grow NJ companies in Camden, there were individual projects in the city that had as many as 40 Camden residents or more working on their construction site alone,” said Freeholder Director Louis Cappelli, Jr. “When you take into consideration all of the union and trade jobs that this report curiously leaves out, upwards of 174 Camden residents have found construction work previously unavailable in the city in just five of the many projects. The report is completely and verifiably false.”

After attracting businesses and companies to come to the City of Camden, the second phase of the City’s larger renaissance was to begin constructing the facilities necessary to house their operations.  This was the first opportunity for the program to generate new jobs and opportunity in the city.

In April, Camden’s unemployment rate reached a 30-year low at 6.6 percent. The ratio of employed adults to the population between the ages of 25 and 54 reached a ten-year high in 2017 at 62 percent. For those directly involved in construction, the average weekly wage for construction jobs in the city increased by nearly 50 percent from 2010 to 2018.

“Of course, this conversation about construction jobs ignores so many other opportunities in the city, effectively rendering that whole EDA report meaningless. It is just one sliver of a much larger pie,” Cappelli said. “Construction jobs don’t include the residents who gained employment as security personnel on these sites, or those who were brought on as maintenance staff or employees after the facilities opened. We are still extremely early on in a gargantuan undertaking. To cherry-pick numbers from one limited sector of this overall growth is irresponsible and completely disingenuous.”