Freeholder Board Swears in Newest Member 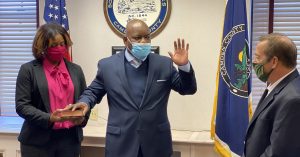 (Camden, NJ) – The Freeholder Board swore in its newest member today, welcoming in Al Dyer, a Pennsauken resident who was elected in November to fill the unexpired term of former Freeholder Susan Shin Angulo. Dyer’s term begins today and will end in December 2021.

Al Dyer is a public servant with more than 20 years of experience in youth athletics and education. He received his BS in Industrial Technology Management from Montclair State University and a M.E.D. in School Leadership from Wilmington University. He is currently the Athletic Executive Director of Camden Health and Athletic Association and oversees the day-to-day functions of the organization. He joins the Freeholder Board after one year on the Pennsauken Township Committee, where he has lived for over 20 years with his wife and daughters.

Dyer is a graduate of Woodrow Wilson High School, where he played football and basketball, and previously served as the vice chairman of the Pennsauken Planning Board.

“On behalf of the Freeholder Board I am pleased and excited to welcome Al Dyer to this body, where I know he will continue his lifelong pursuit of public service and community engagement,” said Freeholder Director Louis Cappelli, Jr. “Al has spent two decades helping to foster growth and positive development in young people and student athletes, and will undoubtedly bring that same passion to helping better the lives of all Camden County residents.”

With Dyer’s swearing in, Barbara Holcomb officially vacates her position on the Board. Holcomb was appointed in January 2020 to fill Angulo’s seat after her resignation and subsequent swearing in as Mayor of Cherry Hill.

“While Barbara was only a member of the Freeholder Board for one year, her insight and experience was invaluable for the last 12 months,” Cappelli said. “From her daily contributions to the departments she oversaw, to her part in the fight to finally replace the outdated term ‘freeholder’ with the more appropriate ‘commissioner,’ she leaves having accomplished more in one year than perhaps any other member to have sat in her position. We are extremely grateful for her service to Camden County, and look forward to hearing about her continued service to the community as a resident in the years to come.”