Freeholder Board Hosts Battle on the Battleship 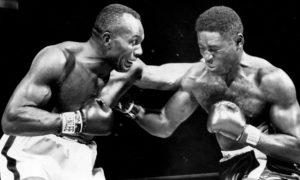 The “Battle on the Battleship” will be centered around amateur sanctioned boxing bouts aboard the ship, and will feature food, memorabilia, entertainment, and more. General admission tickets are available to the public for $50, and VIP tickets which include additional benefits are available for $250. Tickets can currently be purchased athttps://www.eventbrite.com/e/battle-on-the-battleship-tickets-65849251885.

“The Board is proud to be a partner in this effort to honor Camden City native and legend, Jersey Joe Walcott,” said Freeholder Director Louis Cappelli, Jr. “Jersey Joe was a proud champion of Camden City and New Jersey as a whole at a time when both had few internationally known representatives. We are excited to invite the entire community to join us in the City at what is sure to be a one-of-a-kind event on the Battleship New Jersey.

Battle on the Battleship will be held aboard the Battleship New Jersey on Friday, Sept. 27, from 6 p.m. to 10 p.m. All funds raised will be used to support the design and creation of the Jersey Joe statue.

Joe Walcott was an American professional boxer who competed from 1930 to 1953. He held the world heavyweight title from 1951 to 1952 and broke the record for the oldest man to win the title, at the age of 37. That record would eventually be broken in 1994 by 45-year-old George Foreman.

After retiring from boxing, Walcott did some acting, playing small parts in a few movies and television shows. From 1971 to 1974, Walcott held the elected position of Sheriff of Camden County, the first African-American to do so. From 1975 to 1984, he was the chairman of the New Jersey State Athletic Commission.

The Freeholder Board approved $185,000 in funds to begin work on statue in August. Those funds will be repaid by the Historical Society as the result of a fundraising campaign which will kick off in September.

The work is to be created by local sculptor, Carl LeVotch. His design includes an eight-foot bronze figure sculpture with two bronze high relief sculptures, and a bronze replica of The Champion’s ring belt. These works of art will be affixed to a pedestal/base, and the entire monument will be placed permanently on the promenade at Wiggins Park. Work is expected to begin on the artwork by mid-to-late September, with a timeline for completion around Fall 2021.

More information about the statue, fundraising, and Jersey Joe himself can be found by visitinghttps://www.camdencounty.com/jerseyjoe.