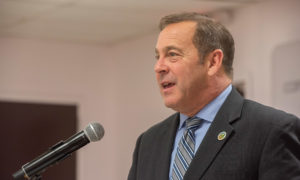 “States, counties, and local governments have been on the front lines of the war against coronavirus, fighting to secure testing and making extremely difficult decisions regarding stay-at-home orders and business closures. Unfortunately, as this pandemic rages on, the long-term effects that measures taken to protect public health have on governments are becoming clearer. Without assistance from the federal level, many local governments nationwide will face enormous budgetary shortfalls because of unprecedented revenue loss.

The Freeholder Board is thankful that New Jersey Senator Robert Menendez is leading a bipartisan effort to ensure that states and local governments hit the hardest by coronavirus get the support they need. The bipartisan proposal would create a $500 billion SMART (State and Municipal Aid for Recovery and Transition) Fund used to offer assistance to states and localities, similarly to how the federal government provides aid after a natural disaster – the hardest hit places receive the most help.

Much like our small and locally owned businesses, state and local governments could not predict the coming pandemic or the effect it would have on their ability to maintain a balanced budget. Just weeks into this crisis, revenues are falling to record lows, threatening cuts to critical programs and other unthinkable actions which would be required to reduce spending proportionately.

This critical proposal builds on the CARES Act which generated an initial push to support state and local governments. It adjusts the criteria for direct aid used in the CARES Act, lowering the minimum population threshold from 500,000 to 50,000, guaranteeing that Camden County would get the direct aid it needs, and which will be critical to providing uninterrupted services and resources for our residents in the months to come.

Unfortunately, U.S. Senate Majority Leader, Mitch McConnell, has already said that he’d rather see states and cities declare bankruptcy than help to save local governments. Senator McConnell recently criticized these necessary steps for “borrowing from future generations,” a concept which didn’t seem to matter in 2017 when he supported a $1.5 trillion tax cut for the wealthy – one which ballooned the federal deficit during a time of economic growth.

I am hopeful that Senator McConnell realizes the devastating impact that inaction would have on states and local governments and supports the proposal to assist residents whose communities have already been devastated by this virus. This bipartisan effort will provide vital resources for county government, and we are hopeful that it moves quickly through Congress so we can put our share of funding to action for the men and women we serve. Here’s a quick reality check for Mitch: who does he think has been coordinating the response to this pandemic? It’s local, county and state governments who have borne the cross for the inaction of the federal government up and down the line.”