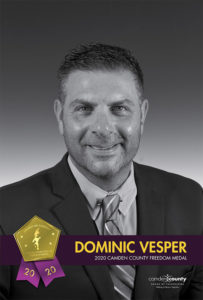 Dominic is a resident of Gloucester Township and has served Camden County and the South Jersey region for decades. His work in many roles represents the spirit of Martin Luther King, Jr. by endlessly giving back as part of both his career and personal life. Professionally, Dominic has long been active in South Jersey with a distinguished twenty-seven-year career with Camden County, where he was able to significantly impact the lives of residents through a variety of programs. Personally, he is passionate about making a difference in his community as President of the Paul VI High School Alumni Association, and the Greater Wildwood Fraternal Lodge of Elks No. 1896. Many years ago, he organized and started a Thanksgiving Meal program that fed over 2,000 individuals this past year alone. Perhaps most notably, Dominic was a founding member and one of the driving forces behind the creation of the Camden County Addiction Task Force. Started in 2014, the task force’s successes include expanded access to treatment, community summits, a widespread education campaign, candlelight vigils, the birth of a sports recovery league, and a program that equips every police department with the overdose reversal agent, Naloxone – resulting in thousands of saved lives. In 2017, he was awarded the County Service Award from New Jersey Association of Counties.