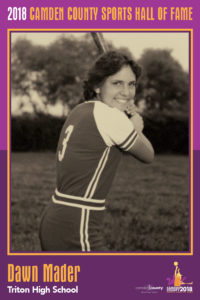 Dawn has a favorite quote from legendary coach of Tennessee Women’s Basketball, Pat Summit. “Whatever it is that you desire to do in life, have the courage and the commitment to do it, and to do it to your absolute best.”

Dawn, a 1984 graduate of Triton Regional High School, was a 3 sport athlete. She excelled in softball.

Dawn went on to play 1 year at Trenton State College where they finished runner up in the Division 3 National Championship in 1985.
Upon returning home from college, Dawn continued playing in the Women’s Fastpich League of SJ and the Delaware Valley Women’s Fastpitch League where she earned MVP 2 times.

In 2004, Dawn started an ASA Organization, the South Jersey Gators. She has coached 10U-18U. In 14 years they have won 83 out of 114 tournaments. Due to the NJSIAA rules, Dawn had to give up coaching the Gators due to her youngest niece Jordan attending Paul VI as a freshman this year.

Dawn is now coaching her great nieces at SU machine pitch, the Rail Dogs out of Sewell. She has also coached in the Bellmawr Street Hockey Association

For 19 years enjoying coaching both her sons, Boomer and Zach, and where she won a National Championship coaching with her father, John. She also coached her sons in Bellmawr Baseball winning minor and major league championships. She also volunteered to coach basketball at Good Shepherd School in Collingswood for 2 years. Dawn also coached Deptford Girls Softball to 3 SJGSA Championships.

For the past 18 years, Dawn has enjoyed a career as a hitting instructor. With her lifetime passion for softball, she is highly respected throughout South Jersey.

Dawn believes in giving back to the community. Both her Paul VI and Gator teams have worked with the Police, made Easter baskets for homeless children, and collected socks for Happy Feet for the Homeless. They also collect clothing items and toys for Friends of Fairview organization.

Today Dawn works for the Deptford Twp. Board of Education as a transportation secretary. She shares most of her time and talents with her family, friends, and players. She most enjoys coaching with her sons Boomer and Zach and nieces Hunter, Breck and Dallas.